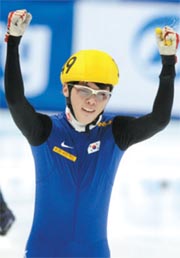 The national short-track speed skating team’s young talent has been performing well of late. They’re not just well-conditioned but the manner in which they compose themselves on the ice is comparable to savvy veterans.

The national short-track speed skating team’s emerging talent still lacks experience and the popularity that notable skaters like Lee Ho-suk, Cho Hae-ri and Sung Si-bak have, but they do not lack talent.

On Feb. 12, Kim Byeong-jun was competing in the 1,000-meter and was trailing the pack when two skaters wiped out in front of him. Kim was in danger of getting tangled up with the skaters but he calmly sidestepped them and went on to win the gold medal.

On the same day, Noh Jin-kyu dominated his competitors in the 1,500-meter race. Noh took a firm lead with five laps remaining and while short-track events usually result in close finishes, Noh outpaced the rest of the pack by roughly 30 meters when he crossed the finish line.

With Korean Skating Union officials and a large number of coaches involved in fixed races and controversial player selections, the KSU opted to use a time-based race at the national tryouts last year instead of the regular race involving a group of skaters competing at once.

But critics argued that with such a system, the new national team members would be merely well-conditioned athletes who could falter in intense short-track competitions that require tight cornering and close encounters with other competitors.