A tearful Ronaldo calls it quits

A tearful Ronaldo calls it quits 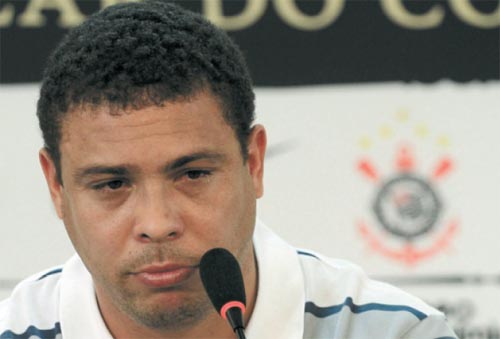 Former Brazil striker Ronaldo announces his retirement on Monday, ending one of the most successful careers in football. [REUTERS/YONHAP]


SAO PAULO, Brazil - Former Brazil striker Ronaldo, who scored a record 15 World Cup goals, announced his retirement on Monday, ending one of the most successful careers in football.

The 34-year-old three-time FIFA World Player of the Year, and twice World Cup winner, said injuries and fitness problems prevented him from playing to his best form.

“I came here to say today that I’m ending my career as a professional player,” Ronaldo, with his two sons at his side, told a packed news conference at the Corinthians’ training complex in Sao Paulo.

“Everyone knows about my history of injuries .?.?. and those pains made me bring forward the end of my career.”

Ronaldo, who had a contract with the Corinthians until the end of the year, said his fitness problems were the overriding reason for his decision. He said he discovered while playing for AC Milan in Italy that he was suffering from a thyroid problem.

“Four years ago at Milan I discovered I was suffering from hypothyroidism, which slows down your metabolism. And to control it I would have to take some hormones that are not permitted in football because of antidoping [rules],” Ronaldo said.

“I wanted to clarify this on the last day of my career,” added Ronaldo, who has struggled to keep his weight down and often suffered the jibe of “fatty” during his career.

“It’s very hard to leave something that makes you so happy, to which you gave so much, which you love so much and could even continue doing, because mentally I still want to, but one also has to accept some defeats. I lost to my body.

“This is the time, I’ll do other things in my life, but I’ll be tied to Corinthians forever.”

Ronaldo broke down in tears when he apologized to the Corinthians fans for failing to deliver the major prize of the Libertadores Cup and said he would still go to their matches as a supporter. He had been signed with the Libertadores Cup in mind but the Corinthians were dumped out of South America’s elite club competition - which they have never won - in the preliminary round two weeks ago. They went out in the round of 16 in 2010, their centenary year.

This season’s failure led to violent protests by fans with Ronaldo and his former Real Madrid and Brazil teammate Roberto Carlos the main targets. Carlos has rescinded his contract with the Corinthians.

Ronaldo burst onto the scene as a 17-year-old with Cruzeiro, scoring 12 goals in 14 appearances including an amazing effort against Boca Juniors when he dribbled through the entire defence. Included in Brazil’s squad for the 1994 World Cup, he did not play but still took home a winner’s medal. By 1996 he had reached Barcelona, where he scored 47 goals in 49 outings. Still only 20, he become the youngest winner of FIFA’s World Player of the Year, an award he retained the following year.

During a brilliant career riddled with goals for four major European clubs - Barcelona, Inter Milan, Real Madrid and AC Milan, in that order - Ronaldo was voted FIFA World Player of the Year three times and also won the European footballer of the year award twice. He won two World Cup winners medals with Brazil. He was an unused squad member when Brazil won the title in 1994 and their top scorer when they won their record fifth in 2002 after he recovered from a serious knee injury that had threatened a premature end to his career.