Living in the margins with big business

Living in the margins with big business 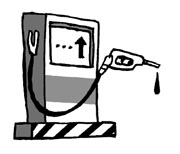 A margin is defined as profits or interest. It is the net sales minus the cost of goods and services sold. In a Korean dictionary, it is defined as “surplus money from a business deal.” In this case, it is closer to “profit” in English, because it means the money that is leftover from a business deal. If a shopkeeper who runs a dress shop sells a shirt for 13,000 won ($11.59) that he bought from a wholesaler for 10,000 won, the margin is 3,000 won. When expenses, such as rent, labor, electricity and administrative costs, are deducted from this, the remainder is the profit.

The margin between loans and savings in the banking business is a similar concept. It is the difference between the interest on a loan and one’s savings. In general, a bank is doing good business if the difference between the interest on a loan and savings is big, because it is the same as selling a dress bought at a cheap price at a high price. Therefore, financial companies that enjoy a big difference in interest between a loan and savings used to be criticized for making easy profits from monetary transactions. But the bankers defend themselves by saying that it is not right to consider the margin as a profit, because the expenses that arise in the course of raising the funds for loans and lending money to borrowers are not deducted. Seen from this point of view, it is right to say that the margin is not the final profit, but an intermediate one. In our daily lives, however, it is similar to profit.

In Korea, where Confucianism is strong, there was a negative view of business. People thought that it was right to sell things at the purchase price and that it was an act of deception to sell them for profit. They also thought it proper to add only a small amount of interest, if it was necessary. Perhaps that is how we got the phrase “sell in big quantities at a small profit.” But in “Heosaeng-jeon,” by Yeonam Park Jie-won, the protagonist makes a 10 percent profit by buying fruit for ceremonies in large quantities.

A margin is decided autonomously by sellers who decide the price based on the market situation. In the capitalist environment of the 21st century, however, it is not possible for a seller to decide the margin on their own. E-Mart and Lotte Mart were criticized for selling pizza and chicken, respectively, with too small a margin. Lotte Mart even had to shut down its chicken business several days after it was launched following attacks from the Blue House. They were dealt the heavy blow because they lowered the price of their goods - that is, they asked for a smaller margin from their sales.

These days, the same government is demanding the opposite. They are twisting the arms of oil and telecom companies, which are private businesses, demanding that they lower their profit margins. Even a cabinet minister, who is an accountant himself, stepped forward, saying he would calculate the cost himself. He said that a margin of 3 percent is a high margin for oil companies and that they should lower it. Maybe it would be better for the government to set the margin for each business.