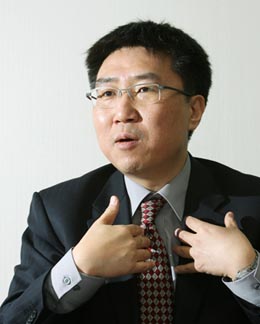 If a country’s welfare system only concentrates on the poor, it would become similar to that of the United States, where welfare is seen as wealth redistribution. Chang says concentrating welfare only on the poor seems effective in the beginning, but it will lose political backing in the end. In the long run, it will make the welfare system less sustainable.

Chang says there is no country that strictly pursues universal or selective welfare, but most countries have a combination of both. The issue is where the line should be drawn, he says.

Chang is the author of best-selling books like “Bad Samaritans: The Myth of Free Trade and the Secret History of Capitalism,” and “23 Things They Don’t Tell You About Capitalism.” The former sold more than 500,000 copies in Korea since its release in October 2007 and the latter became an instant best seller after its debut last October. He is so popular in Korea that the term “Chang Ha-Joon syndrome” was coined for people who admires his work.

Q. There is an ongoing debate in Korea on how far welfare should go. The Democratic Party is promoting the idea of not only free meals at schools, but also free education and medical service. Do you think the country is going in the right direction on this?

A. First of all, it is wrong to call any welfare provision “free.” Even the poor pay taxes, although they pay less. They pay the same amount of indirect taxes such as value-added tax. We could debate how people share the tax burden, but the debate on whether it should be free or not does not makes sense.

The Grand National Party criticizes the Democratic Party’s stance by saying that universal welfare would even give benefits to the rich, who may not need it as much, but this is also wrong.

I believe in universal welfare, but there is no country that only provides universal or selective welfare. The issue is where the line should be drawn.

Korea has embraced compulsory education up to junior high school. This means that the public believes in the need for universal welfare in this area.

We should not draw a clear line between universal and selective welfare. Politicians are only having a war of words using political rhetoric.

The GNP argues that more benefits should be given to the poor rather than spreading them out universally. What do you think?

It makes sense in a way because it means higher spending for those who really need it. However, if a country gives benefits only to the poor, it would become much like the United States.

In the U.S., where welfare is not universal, it is considered taking money from the rich and giving it to the poor.

In the beginning, concentrating welfare only on the poor seems effective, but it will lose political backing in the end.

In the long run, we will not be able to help those who we really wanted to help. It will make the welfare system less sustainable.

Some say expanding the scope of welfare would only dry up the country’s finances. What do you think?

Korea has not reached that point yet. In fact, it is far from it.

That ratio is the lowest among Organization for Economic Cooperation and Development countries, except Mexico, which has less than half the per capita income of Korea.

In other words, Korea’s welfare spending is the smallest among developed countries. This is like asking a patient with malnutrition to go on a diet to prevent getting fat in the future.

In your books, you repeatedly praised the Scandinavian model. Do you think Korea can adopt the same model?

I’ve heard many people say that the Scandinavian model is not suitable for Korea. They say Sweden’s population is only 10 million and Korea cannot learn from a country that has only one fifth of its population.

But the country we worship so much and we think we can copy, the United States, has five times more people than Korea. The criticism does not make sense.

There are actually few countries like the United States in the world. It is so rich in natural resources.

We can learn more from countries like Sweden or Finland than from the United States.

Labor relations in Sweden and Finland have not been always good. In Finland, the left and the right fought hard in the early 20th century and there was a civil war in 1918, which led to many casualties.

Though it may not seem so, there are many similarities between Korea and Finland. Sweden had the worst industrial relations in the world in the 1920s - as measured by the number of working days lost per worker in industrial strikes.

Is the Scandinavian model sustainable?

It is more sustainable than most people expect. The model has existed since the early 20th century.

Throughout the 20th century, economic growth in Sweden and Finland has been much higher than that of the United States. Those who question the sustainability (of the model) do not know these two countries very well.

Korea’s gross domestic product per capita has stayed at around $20,000 for a decade. Why is that?

There could be many reasons. Since the Asian financial crisis in 1997 and 1998, Korea’s economic sentiment has become very conservative. Local industries do not invest or enter new businesses as aggressively as they used to.

The South Korean economy is built upon heavy machinery and chemical industries that were developed in the 1970s and it has not changed much.

Concentrating on these industries made sense until the 1990s. But not a lot of effort was made to build upon them.

As restructuring and layoffs became more common, young people have placed importance on job security and many try to study medical science or law. Thus, the quality of human resources in other industries has stagnated.

In addition, as shareholders’ influence has grown, companies have tried to concentrate on short-term performances.

As a result, long-term growth potential has weakened. We need new strategies for further growth.

What is the reason behind the so called “Chang Ha-Joon syndrome” in Korea?

You’ll have to ask readers. The neoliberalist model has prevailed in the country since the Asian financial crisis, but people have realized it has failed and the countries that neoliberalists worship so much, like the United States and Britain, were hard hit by the global financial crisis. Now there is strong demand for alternative ideas.