Dooly the dinosaur, one of Korea’s most beloved cartoon characters, is the subject of a tug of war between two local governments that claim him as their mascot. By Kim Soo-jung


One of Korea’s most beloved cartoon characters has become the subject of a tug of war between two local governments that are battling for the right to claim it as their mascot.

Underlying the fierce competition is the fact that both governments have ongoing projects with the character, a dinosaur named Dooly, that they launched to revitalize the local economy and promote tourism.

The controversy began on Feb. 2 when the Dobong District Office issued a hojuk (family registry) for Dooly. The hojuk is a legal document that records one’s birth, death and other events.

Dooly’s hojuk says that he is a Ceratosaurus born 10 million years ago and that he was trapped in a glacier during the Ice Age. When the glacier drifted down to the Ui Stream in northeastern Seoul, he was found by a young girl named Young-hee. He was adopted by Ko Gil-dong and Park Jeong-ja, the parents of Young-hee and her brother Chul-soo, in 2007.

Lee In-ku, director of the Dobong District Office’s “Dooly task force team,” offered evidence of the district’s claim to the character, saying that the address on the hojuk (Ssangmun-dong 2-2, Dobong, Seoul) comes from “Bomulsum,” the 1983 comic in which Dooly first appeared. 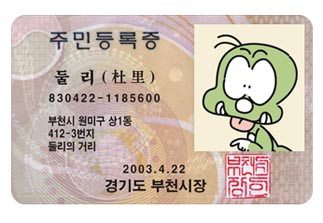 Dooly is registered with the city of Bucheon, which made him an honorary citizen in 2003.

The sticky point comes from the fact that Dooly is already registered with the city of Bucheon, which made him an honorary citizen in 2003. They even gave him his own resident registration number, #830422-1185600.

Bucheon has held a birthday party for Dooly every year since 2003. It continued the tradition even after Doolynara, the licensing and animation production company that owns the character, refused to participate in the event beginning in 2007 because of a bevy of adult entertainment establishments that have opened there in recent years. The city also has a street named after the character.

Both cities are part of a recent trend of using fictional characters to promote local projects.

Dobong District has been planning a Dooly theme park with a museum dedicated to the dinosaur since 2007. Lee, the Dobong District Office director, said that construction on the museum, estimated at 13 billion won ($11.6 million), is slated to start next year, with a target completion date of 2015.

Bucheon, meanwhile, has spent the past eight years transforming its image from that of an industrial city to one dedicated to animation. In 1998, the city established the Korea Manhwa Contents Agency (Komacon) and the Bucheon International Comics Festival. Dooly has served as the city’s mascot since 2003.

In the duel over the dual registration certificates for the fictional dinosaur, the Dobong District Office said that the hojuk does not represent a double registration.

“There is no legal conflict between the two documents because what we have issued is the family registry, and the address therein is the character’s hometown,” Lee said.

The hojuk only records one’s birthplace. Registration can change as one moves.

Dooly’s creator, Kim Soo-jung, takes delight in the tussle over his character. He says he is happy that Dooly is being used in so many ways and “hopes it will produce positive results for other cartoonists and artists.”

Dooly was a leading character in “Bomulsum” for 10 years beginning in 1983 and is considered one of the most successful cartoon characters in Korea. An animated series based on the character aired on KBS from 1987 to 1988. In July 1996, a full-length animated film about the baby dinosaur was made. That film was also released in Berlin in January 1999. Two years ago, a new series featuring the character called “New Little Dino Dooly” began airing on SBS and cable channel Tooniverse.

This is not the first conflict between local governments over cultural content. The famous folktale characters Simcheong and Hong Gil-dong were part of similar conflicts.