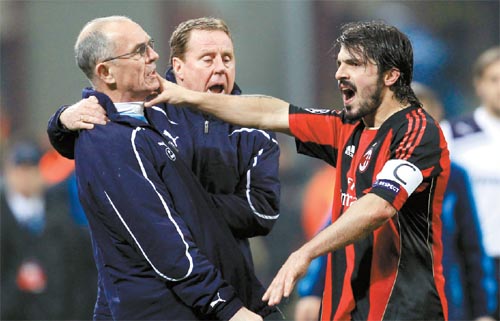 Milan midfielder Mathieu Flamini was lucky just to be booked for a crude two-footed lunge that forced Vedran Corluka out of the game, and Gennaro Gattuso is likely to face UEFA repercussions after appearing to headbutt Spurs assistant manager Joe Jordan after the final whistle. Gattuso had to be pulled away from Jordan and Spurs manager Harry Redknapp branded the Italian firebrand “crazy.”

“I lost control,” Gattuso told reporters. “There is no excuse for what I have done. I take my responsibilities for that. I was nervous. I didn’t want to argue with players and I did it with him, but I was wrong to do what I have done.”

“It was a deliberate tackle. He could have broken his leg. A referee should have red-carded him,” an angry Redknapp told a news conference.

Crouch, who finished with aplomb from 10-meters after a lightning break from Aaron Lennon, said Spurs was the better side.

Redknapp said: “I thought we deserved to win, we limited them to a few chances .?.?. defended magnificently. It was a great win. It’s a fantastic achievement to beat Milan in the San Siro but the job is not finished.”

The Premier League side, which lost 4-3 at San Siro to Milan’s city rivals Inter in the group stage in October, were the better side in the first half before Milan improved after the break. Spurs had an early shout for a penalty turned down when Rafael van der Vaart’s effort appeared to strike Alessandro Nesta on the arm.

The home side lost goalkeeper Christian Abbiati after 18 minutes with a head injury. Abbiati went to the hospital for checks on concussion and his replacement Marco Amelia had to touch a fierce Van der Vaart shot over the bar after Zlatan Ibrahimovic had fired a free kick wide in Milan’s first meaningful chance.

Milan boss Massimiliano Allegri, with several midfielders injured and the likes of Antonio Cassano ineligible, sent out a defensive-looking team with centre back Thiago Silva in midfield.

He threw on Brazil forward Alexandre Pato at the break and Milan’s Mario Yepes had two headers well-saved by Heurelho Gomes. Robinho had a close-range shot deflected wide and Milan thought they had equalized late in stoppage time, but Ibrahimovic’s spectacular overhead strike was ruled out for a push. The drama in Italy took attention away from the 33-year-old Raul’s record-breaking night in his native Spain. Raul earned the overall goal-scoring European record.

“It was no fluke - that’s a genuine goal scorer we are seeing here,’’ Schalke coach Felix Magath said. “His marker has to come the long way round and Raul knows it - he knows exactly where he’s going to put it. The special thing about him is that he works so much for the team as well.”