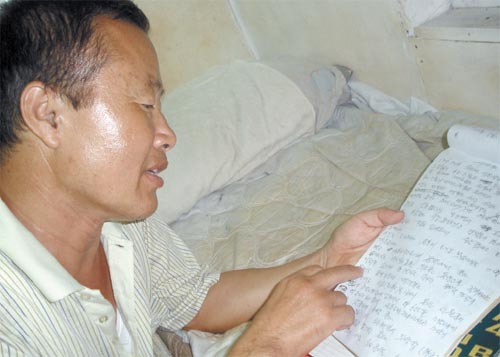 Kim Dae-keun, captain of the Geummi 305, reads the diary he wrote while held captive by Somali pirates for four months. [YONHAP]


MOMBASA, Kenya - The Korean captain of the Geummi 305, a boat recently released by Somali pirates, had planned to feed the pirates sleeping pills to escape but was dissuaded by other crew members fearing the possibility of failure, according to his diary, which was released yesterday.

Kim Dae-keun, the 54-year-old captain, was one of 43 crew members freed last week, four months after Somali pirates hijacked their 241-ton crab trawler in Kenyan waters. The crew, comprising of two Koreans, two Chinese and 39 Kenyans, all arrived safely at the Kenyan port city of Mombasa on Tuesday.

Kim’s diary, obtained exclusively by Yonhap News Agency, contains a vivid description of the 124 days the crew spent in captivity.

The captain wrote in the diary that he asked a chef in the early stages of their captivity to blend 100 sleeping pills in bottles of mineral water and provide them when the pirates ask for water. But the Kenyan chef, with tears in his eyes, refused to do so, saying all crew members would be killed if things went wrong, Kim said.

“After giving up the plan, I thought several times that I would rather swallow the pills and die,” he wrote.

Kim also said he once thought of using two 12-pound dumbbells to attack and disarm pirates on guard duty.

“I had planned to attack one sleeping pirate with my dumbbells and steal his pistol before killing other pirates one by one. But such an opportunity never came,” he wrote.

The diary showed the pirates used the Geummi for piracy multiple times after realizing that its owner would not be able to pay a ransom due to financial difficulties.

“When an Indonesian LPG carrier is confirmed to be approaching a spot about four miles ahead, the boss of the pirates hands down an emergency order,” Kim wrote on a page of the diary dated Oct. 24. “Heavily armed with AK rifles, handguns, rocket guns and submachine guns, 10 pirates left in two boats that also carried ladders and ropes. About 10 minutes later, the Indonesian ship doesn’t move. Pirates remaining on our ship fire off salutes and thumbs up in a sign that they succeeded in their attack.”

After the first act of piracy using the ship succeeded, the pirates promised to release it if they were successful again but broke their promise, Kim wrote.

The pirates moved like a professional group whenever they attempted hijackings.

They even had a translator who was proficient in both Somali and English, he wrote, adding that the translator was also in charge of accumulating information, searching Internet news and listening to BBC radio and so forth.

The diary also revealed that the pirates appeared calm even when European Union warships came close and ordered the Geummi to stop, apparently because they believed that nobody would attack them as long as they had hostages.

The warships, in fact, sailed away without posing any threat, Kim wrote.

Kim did not conceal his envy whenever other ships hijacked at a similar time were released in return for large ransoms.

Kim wrote in his diary several times a day whenever the pirates lapsed in their surveillance of the crew.

The 350-page diary, filling seven notepads, began with the phrase, “Dear you,” showing the writer’s affectionate feeling toward his wife.

“I came to write the diary out of the thought that I could be shot to death by the pirates without leaving a word as a will,” Kim told Yonhap.

“I had never told her how much I loved her before. So I wanted to express my feelings for her in writing before I died.”