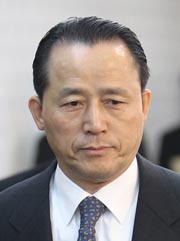 The head of Korea’s weapons procurement agency offered to resign yesterday, a government source said, amid allegations that he was involved in a high-profile graft scandal.

Chang Soo-man, commissioner of the Defense Acquisition Program Agency, tendered his resignation to the presidential office Blue House earlier in the day, a source said.

“Chang, commissioner of the DAPA, tendered his resignation to President Lee Myung-bak today,” the source said on the condition of anonymity.

The source said Chang decided to step down after newspapers reported he was linked to a businessman at the center of the graft scandal that led to the arrest of former police chief Kang Hee-rak.

On Tuesday, Kang, who took office in March 2009 as head of the National Police Agency and voluntarily resigned in August last year, was indicted on charges of receiving 190 million won ($169,491) from the businessman in exchange for using his influence to select police officials for promotions while in office in 2009.

The 65-year-old businessman, Yoo Sang-bong, was arrested last December as a key suspect in the bribery scandal that has implicated former top police officers and construction executives, who allegedly received bribes in return for favors in his bid to broker a number of contracts to operate canteens at construction sites.