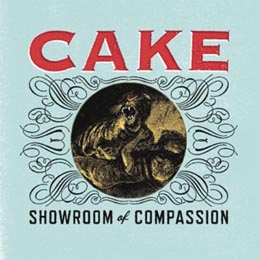 Alternative rock has always seemed a bit vague as a classification for a band such as Cake. Now, alternative energy - that’s an apt label to slap on them.

Recorded at their own studio in southern California, Cake’s first offering in seven years, “Showroom of Compassion,” is another dash of the band’s idiosyncratic rock.

Rock it may be, but it also boasts a little bit of hip-hop, some funk and blues, country, and a dash of folk and jazz - and of course vocalist John McCrea’s slacker-poet metaphors and monotone delivery.

“Federal Funding” kicks things off with a gloomy midtempo grind, “What’s Now is Now” has a funky start-and-stop bass line, and the doom-filled “Mustache Man (Wasted)” relates a random hookup gone wrong through some hysterical imagery.

Solid lead single “Sick of You” is full of contagious riffs and has Cake’s trademark backing-band shouts, and the highs and lows of “Easy to Crash” make for one of their strongest tracks, with a guitar crunch that earns the right to be played loud.

Cake isn’t branching out or breaking their mold on “Showroom of Compassion,” but with so many styles seamlessly mingling through virtually every track, who’s complaining?

Heavy snow forecast for some parts of Korea from Saturday

Rental car crashes through guardrail, down cliff, in Korea