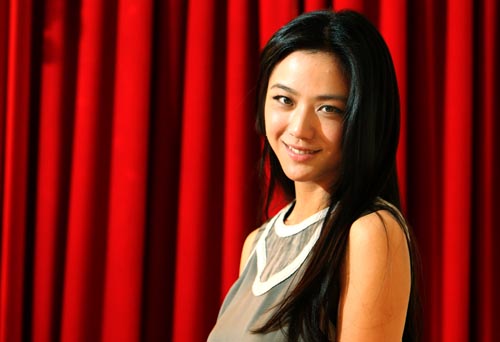 With the award-winning film “Lust, Caution” (2007), directed by Ang Lee, Tang instantly engraved her name in the minds of moviegoers with her role as a sultry spy assigned to kill a Japanese collaborator. She was a newcomer but was never overshadowed by her veteran co-star Tony Leung Chiu-Wai.

In her latest film, “Late Autumn,” which was released in theaters nationwide yesterday, Tang plays a quiet and withdrawn woman who is serving a nine-year prison term for killing her husband but is out on leave to attend her mother’s funeral. While she is out of prison, Tang’s character, Anna, meets Hoon, a male prostitute, and they fall in love. The film, shot in Seattle, stars Korean actor Hyun Bin (“Secret Garden”) as Hoon and is directed by Korean filmmaker Kim Tae-yong.

During a recent interview with the JoongAng Ilbo, Tang spoke about her career, new film and her relationship with her Korean colleagues.


Q. People who have seen “Late Autumn” say you look gorgeous, even in a worn-out trench coat and no makeup.

A. Do you think so? I never thought of myself as beautiful. I was far from pretty when I was young. I never wore high heels and skirts before I became an actress.

I still feel uncomfortable with these types of clothes and shoes (pointing at her chiffon blouse). When the camera is not rolling, I wear jeans, T-shirts and sneakers.

Your character doesn’t wear any makeup throughout the film. Why is that?

Kim, the director, did not want me to wear any, so I didn’t. My character Anna is betrayed by the man she loves and is serving a prison term for murder. We thought wearing makeup would make her look glamorous, so instead we gave her a more natural look.

You had to act in English and you worked with a multinational staff from Korea and the United States. What was that like?

I believed in director Kim Tae-yong. He’s very sophisticated and sensitive. He’s honest and kind-hearted. If you see his eyes, you know. Although we use different languages, we had no difficulties understanding each other. Sometimes just a single word is enough to understand others.

What made you become an actress in the first place?

I majored in directing at the Central Academy of Drama (in Beijing) because I wanted to become a director. When you study directing, you also learn how to act. Famous directors like Kim and Ang Lee are also excellent actors.

One of my teachers recommended that I try acting. So I landed a minor role in a television drama, but I made a lot of mistakes. Sometimes I was even acting without knowing I was out of frame. (Laughs.)

You were one of the final contestants during the final round of the 2004 Miss Universe pageant in Beijing. What was that like?

Graduation was approaching but I had no job. That was when I saw an advertisement for the beauty pageant. I wanted something new and fun. I didn’t expect I would become one of the finalists.

“Lust, Caution” was pretty much the same for me. I didn’t know I would be chosen over more than 10,000 candidates. I think that’s life. If you set a goal and think you must achieve it, there is a slim chance you’ll do it. Instead of having high expectations, I try to enjoy every moment of my work.

“Lust, Caution” was a huge success that brought you fame. Was there anything you lost because of it?

I don’t think the film affected my life that much. When the computer and television are off, I’m just an ordinary person with two arms and two legs.

Any last words for fans who have been waiting for the release of “Late Autumn”?

I hope people will have compassion for Anna. She is a woman who thinks there is no more love in her life. When she meets Hoon, she opens her heart and waits for him to come to her.