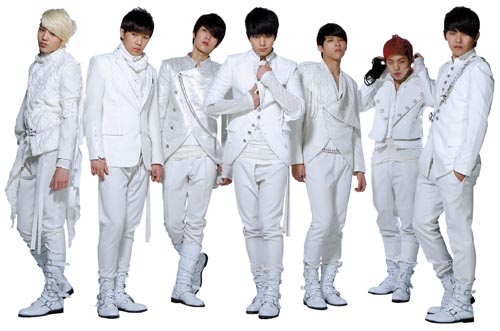 
Infinite may be one of the flurry of pop bands armed with charming looks. But the seven-member boy band says they are different in that their emphasis is on the music rather than visual elements, including their looks.

Their claim is underscored by the fact that they belong to an agency that also manages hip-hop band Epik High and rock band Nell - both of which are known for their raw talent. In most cases, pop bands are managed by agencies that deal only with pop bands.

“We have strived to foster the ability to create our own style out of any musical genre. That is our tactic to surviving the fierce competition,” Woo Hyun, one of the band members, said in an interview with the Korea JoongAng Daily last month.

After releasing their first album “First Invasion” last June, Infinite came back last month with a six-song EP called “Evolution.” The title song “Before the Dawn,” also known as “BTD,” is a dance number with a powerful beat and masculine vocals.

The song has yet to dominate the local charts but the band members say they have fully devoted themselves to ensuring the album’s success. That included perfecting a so-called “scorpion dance,” in which the seven young men, aged between 18 and 22, stand up at the same time from a prone position on the floor with one leg stretched behind them like a scorpion’s tail.

To train for such physically demanding moves, they practiced for 10 hours per day. Some members even sustained injuries in rehearsal and had to be treated by an orthopedist.

But all of that is behind them and they are getting ready to present a Japanese version of the song “Before the Dawn” at a showcase in Tokyo on April 2.

“Moving into the Japanese market is sure to be a crucial turning point for us,” said L. “We started studying Japanese even before making our debut in Korea.”