Who is to blame when smoking kills?

Who is to blame when smoking kills? 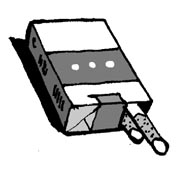 Jesse Williams learned to smoke at the age of 20 in 1950 while serving in the U.S. Army in Korea. He started smoking because he was told that cigarette smoke repelled mosquitoes. He gradually became addicted to cigarettes. At one point smoked three packs of Marlboro cigarettes, a Philip Morris brand, each day. After returning home from Korea, he settled down in Portland, Ore., and had an ordinary middle-class family with six children. The only problem was his habit of smoking. Since his wife complained about the smell of cigarettes, he smoked outside the house. And when the family went out to eat, Williams ate in the smoking area alone while his wife and children dined in the non-smoking section. He tried to quit smoking many times, but to no avail. After 47 years of smoking, he was diagnosed with lung cancer. Six months later, he died at the age of 67. Before he died, he said, “Damn the cigarette company! It cheated me.”

In 1997, the bereaved family filed a lawsuit against Philip Morris for the damage caused by smoking. In similar lawsuits in the past, Philip Morris - the Goliath of the industry - had never been defeated. The case, which started at a district court in Oregon, became “the trial of the century,” as it lasted for 10 years until reaching the U.S. Supreme Court. Finally, the court handed down its ruling in March 2009, saying that Philip Morris was liable for compensatory damages of $820,000 and punitive damages in the amount of $79.5 million. It was the largest such award paid by a tobacco company in history. The court said that Philip Morris made enormous ill-gotten gains by hiding the fact that smoking causes lung cancer and nicotine is addictive, which the company had discovered through its own research.

The number of lawsuits against tobacco companies grew in the United States in the 1990s with the emergence of whistle-blowers. Documents showing that cigarette companies covered up research confirming the hazardous effects of smoking were exposed. More than 1,000 lawsuits were filed. Smokers in Europe and Japan then began battling tobacco companies, too.

In a tobacco lawsuit in Korea, the court ruled for the first time that there is a considerable correlation between smoking and lung cancer, implying that cigarette companies are accountable for the damage and paving the way for more lawsuits. Is smoking an individual choice or the result of tobacco companies’ wrongdoings? The moment of truth will come soon.