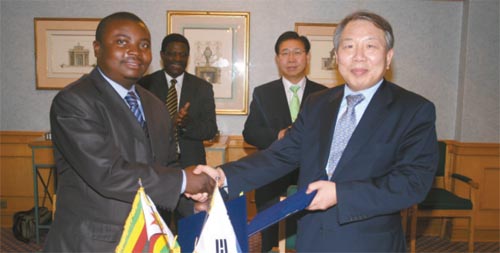 
To kick off the new year, Posco recently outlined an aggressive strategy and vision for 2020, highlighting its goal of generating 200 trillion won in several key units. The company is aiming to hit 120 trillion won in revenue in its core businesses - mainly steel - as well as 60 trillion won from growing segments such as energy and chemistry, and 20 trillion won in promising areas including green technology.

In the overseas arena, Posco is looking to further globalize its steel business by investing in factory construction and securing natural resources and raw materials. Domestically, it will continue to explore ways to promote the steel industry and actively invest in environmental and energy-related industries, which officials see as potential growth engines.

The company has established a new unit called Posco E&E to promote refuse derived fuel development and the conversion of sewage sludge into fuel. It also held a groundbreaking ceremony last year for an RDP facility in Busan, where the company expects to secure 1.5 billion won worth of carbon emissions rights and eliminate the need for 34 billion won in crude oil imports annually.

At the same time, Posco is working on galvanizing the fuel cell business, which is one of the hottest areas of renewable energy. Fuel cells are an environmentally friendly form of energy generation and have generated much buzz in recent years. Posco has hooked up with the city of Seoul to develop policies to increase the supply of fuel cells and work together to explore green growth and related technologies. In April of last year, Posco opened a stack manufacturing facility, giving it the ability to produce a key material used in fuel cells.

Posco’s main goals this year also include becoming a diversified materials company by propping up its non-steel businesses. The company will pay particularly close attention to green development and supplying the materials that drive this sector. To achieve its goals, Posco and its affiliates have established a communications network encompassing universities, government organizations and special institutes.

The company is also continuing its efforts to secure nickel, manganese, titanium, magnesium and lithium. In a recent development on this end, Posco and New Caledonia Island’s Societe Miniere du Sud Pacifique(SMSP) set up a joint venture and produce 30,000 tons of nickel annually. In addition, Posco has established a ferromanganese manufacturing company - paving the way for production of high-manganese automotive steel. The move will help the country diversify its steel sources, as it primarily depends on solid manganese steel from China at present.

In other developments, Posco and Kazakhstan’s UKTMP reached an agreement to set up a joint venture to produce titanium slabs. Posco is also looking to capitalize on the booming demand for electric and hybrid cars by seeking ways to produce lithium used in batteries for the vehicles. The firm signed an agreement with the Ministry of Land, Transport and Maritime Affairs and the Korea Institute of Geoscience and Mineral Resources to further explore this area. Posco and the ministry will invest 15 billion won and 30 billion won, respectively, through 2014 in such efforts. The Korea Institute of Geoscience and Mineral Resources as well as RIST will team up to conduct the research necessary to establish a carbon lithium plant.

In step with its moves to become more diversified, Posco will secure global marketing channels in the Middle East and Africa and cement contracts to participate in overseas development projects.