U.S.: Let them all hear Clapton

U.S.: Let them all hear Clapton 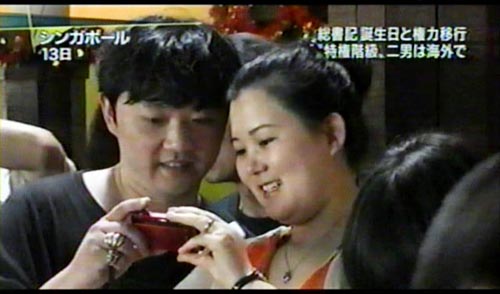 Kim Jong-chol, the North Korean leader’s second son, and a woman next to him, smile while sharing pictures on his digital camera at Underwater World Singapore on Monday. Japanese broadcaster TV Asahi suggested the woman might be Kim’s wife given that they were wearing similar rings. The footage was captured from Japanese TV Asahi. [YONHAP]


The United States called on North Korea Wednesday to open up and reach out to the outside world so the people of the impoverished communist state could enjoy more food and diverse culture.

“Kim Jong-il’s son attended an Eric Clapton concert in Singapore,” Philip Crowley, assistant secretary of state for public affairs, wrote on Twitter. “Actually, the Dear Leader himself would benefit from getting out more often. Of course, there is nothing preventing Kim Jong-il from opening up North Korea so his people could enjoy Clapton, and maybe get more to eat.”

Crowley was discussing the report that Kim Jong-chol, the second son of the North Korean leader, attended the British guitarist’s concert in Singapore on Monday. The Swiss-educated son also went to several Clapton concerts in Germany in 2006. The 29-year-old seems to be sidelined by his younger brother Jong-un in the North’s power transition reportedly because Jong-chol has a weak temperament stemming from a hormone-related disease.

The two were born to leader Kim Jong-il’s third wife, Ko Young-hee, who died of breast cancer in 2004.

The leader’s oldest son, Jong-nam, who was born to the leader’s second wife, Song Hye-rim, has been adrift in China since 2001, when he was caught trying to visit Tokyo’s Disneyland with his son and wife on a forged passport.

The 39-year-old Jong-nam is considered less qualified because his mother was a divorcee before meeting the leader in the early 1970s, although he is said to be favored by China, North Korea’s major communist ally.

Reports said that the North Korean government failed to provide food and other gifts to its people to celebrate Kim’s birthday this year because of the nation’s chronic food shortage and economic plight. North Korea apparently wants to woo aid from South Korea and the U.S. through the resumption of six-party talks, which have been stalled since the North withdrew from the negotiations in April 2009.

Working-level military negotiations between the two Koreas, however, failed last week when North Korea walked out of preparatory talks, citing the South’s demand that the North apologize for the shelling of a border island and the sinking of a South Korean warship last year. The North’s recent provocations are widely believed to be linked to Kim Jong-il’s plans to transfer power to Jong-un in an unprecedented third-generation hereditary power transition.

Meanwhile, South Korean Minister of Foreign Affairs and Trade Kim Sung-hwan urged North Korea to open up to its brother county in a meeting with journalists in Japan yesterday.

“North Korea should change its position of talking solely about economic matters with us,” Kim said. “Dialogue between the two Koreas will see some developments only when the North recognizes us as a full partner [who discusses comprehensive matter with the North].”

Kim, former senior secretary to President Lee Myung-bak for foreign affairs and national security, said the Lee administration used both engagement and confrontation in dealing with inter-Korean relations. He said it’s the North’s turn to change.

“The North talks with South Korea on matters that bring economic benefits [to its country] and it tries to discuss denuclearization and a peace treaty with only the U.S., and that’s not right,” Kim said.