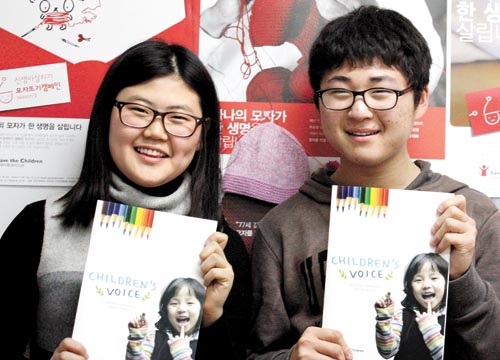 Students Kim Yoon-hee, left, and Bae Byeong-u hold up the report they presented at the UN Committee on the Right of the Child conference held in Geneva on Feb. 10. By Lee Han-gil


Two 15-year-old Korean students stood in front of 18 civil rights commissioners as presenters in a conference room of the United Nations Committee on the Rights of the Child in Geneva on Feb. 10. The conference was held to evaluate Korea’s child and adolescent rights.

The two students, Bae Byeong-u and Kim Yoon-hee, both seniors at Gahoe Middle School in Hapcheon County, South Gyeongsang, were the first young Koreans to participate in the UN conference. A person under 18 years of age is referred as a child in the UN.

Bae and Kim started their presentation by saying that children’s rights in Korea aren’t respected enough and that the reason is that adults fail to pay attention to what they say.

As soon as their 15-minute report ended, the commissioners asked the two students question after question, ranging from “Where do Korean children turn to when somebody violates their rights?” to “How often do you receive corporal punishment?” As Bae and Kim responded, the commissioners seemed to nod their approval.

In an interview with the JoongAng Ilbo last Saturday after their return to Korea, the two students said that the experience represented a turning point in their lives. The interview was conducted at the office of Save the Children, a relief organization for international children located in Mapo District, Seoul, that sent the students to the UN conference.

Korea ratified the UN Convention on the Rights of the Child in 1991. Every five years thereafter, the Korean government has submitted reports on children’s issues and the state of adolescents’ rights. For balance, private organizations such as Save the Children submit reports as well. But none of the reports had ever been submitted by the children themselves.

So when Save the Children was preparing this year’s report, it decided to include children’s rights abuse cases as told by children.

The organization held a human rights camp and invited 107 children and adolescents, including Bae and Kim, residing in farm villages and children’s shelters in the countryside to tell their stories. At the camp, the children studied and talked about children’s rights.

Save the Children also conducted an online survey last year asking children and adolescents about human rights abuses in their lives.

The majority of the 671 respondents said the “right to freely express opinions,” was needed most, because “teachers and parents don’t take children’s views into account when deciding on school camp destinations or which TV channels to watch.”

One respondent said, “I was upset because my teacher looked through the text messages on my cell phone.”

“Adults tend to think we don’t care, but we have worries and secrets we want to keep,” Kim said during her UN presentation. She also voiced a need for adolescent voting rights.

Both the survey and Kim and Bae’s report will be used as references when the government submits its report to the UN in September.

After returning to Hapcheon, the two students are planning to start a discussion group on human rights for children and adolescents.