With diploma, comedian graduates to educator

With diploma, comedian graduates to educator 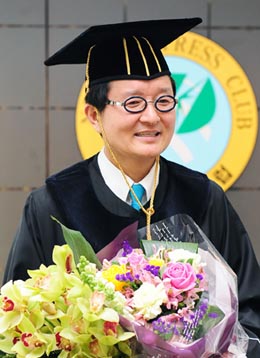 After nine years of entertaining children, comedian Kim Jong-seok, 56, who for 19 years has played the dad on the children’s television program “Ding-dong-daeng Kindergarten,” will receive his doctoral degree in pedagogy from Sungkyunkwan University on March 25.

At Taepyeongro Press Center, Seoul, on Feb. 15, Kim briefed reporters about his dissertation, titled “The Effects of Parents’ Playful and Efficient Rearing of Children on Children’s Playfulness.”

Like the veteran MC of children’s television that he is, Kim said he found in his research that “the amount of time a father spends with his child is directly proportional to the child’s creativity, intelligence and stamina.”

“Fathers are responsible for 70 percent of a child’s problems,” he said, and advised fathers to “play with children more rather than just let them inherit property and financial assets.”

“To a child, the world’s best amusement park is a dad,” Kim said. “So lift them up, arm-wrestle them and play with them.”

It wasn’t easy for Kim to finish his dissertation. Before he could begin writing it, he had to pass an examination but since he was so busy with his television work, he failed the test 10 times before he finally passed. While doing his research, he said he discovered that there were not many Korean-language studies on the subject of parent-child play. Although there were materials in English, they proved too difficult for him to understand.

People who knew that Kim was juggling TV appearances, lectures and academics praised his sincerity, but others who did not know him doubted whether a celebrity could study “properly.”

Kim said he cried twice while writing his dissertation. The first time was when he was writing a paper about children diagnosed with Attention Deficit Disorder. The second was when his dissertation was finally approved after a five-month screening process late last year. Kim said he is hoping to educate students using both theory and experience. Since 2006, Kim has taught early childhood education at Seojeong College University.

He added: “I want to help create a world where there are no fathers who play with their children just on Children’s Day.”

On that account he suggested that fathers create “play holidays” two or three times every month when the father gets to play with their child all day. He believes this will decrease the number of problematic children.