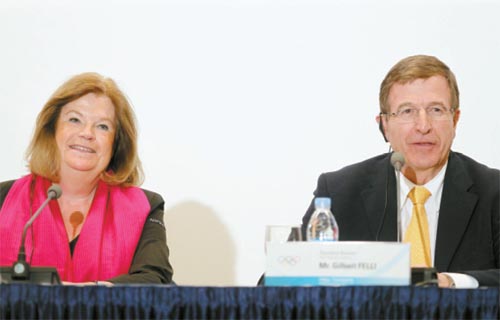 Gunilla Lindberg, left, and Gilbert Felli of the International Olympic Committee’s on-site inspection team fields questions from the media during a press conference in Pyeongchang, Gangwon, on Saturday evening. [YONHAP]


The International Olympic Committee’s inspection team said it has a positive impression of Pyeongchang’s bid for the 2018 Winter Games based on the strong, passionate support from the public and government during their week-long stay in Pyeongchang, Gangwon, at a press conference on Saturday.

“We have also seen progress in Korean winter sports during the last four years,” she said.

North and South Korea remain technically at war and the North Korean artillery shelling of Yeonpyeong Island in the Yellow Sea less three months ago raised security concerns on the Korean Peninsula.

“We’ve had this situation for the past 60 years with North Korea,” said Lindberg.

“During the time, South Korea has hosted the Olympic Summer Games, the World University Games, the Asian Games and other events and championships,” Lindberg added.

Pyeongchang’s current bid for the 2018 Olympics is its third consecutive, after coming short for the 2010 Games to Vancouver, Canada, and 2014 to Sochi, Russia.

Despite positive remarks from the IOC delegation, the Pyeongchang bid committee knows there is still a lot of work to do until the winning bid is announced on July 6 in Durban, South Africa.

“We’re very pleased that we’ve been able to show the IOC that we’ve lived up to our commitment to the IOC and that we have strong support from the people and the government for our bid,” said Cho Yang-ho, chairman of the Pyeongchang bid committee.

“A successful inspection doesn’t always lead to a successful bid. It’s up to the IOC to make the decision. We can’t say at this point whether we’re optimistic or pessimistic. We will try hard until July 6 in Durban,” Cho added.

The 14-member IOC delegation will start its final inspection in Munich on Feb. 28 and the technical evaluations of the three bids, including Annecy, France, are expected to be made public in May.

The results of the on-site evaluations will be taken into account in the technical evaluations before the winning bid is decided.

Four international events remain until the final IOC vote in Durban. The most important will be the Candidate Cities Briefing for IOC candidate cities in Lausanne, Switzerland, between May 18 and 19.

Pyeongchang and the two other candidates will be able to promote their bids one last time to the 110 IOC voting members.

Olympic gold medalist Kim Yu-na is expected to play a prominent role in promoting the Pyeongchang bid after competing at the ISU World Figure Skating Championships in Tokyo, Japan, at the end of next month.