FA Cup over for Chelsea and Crawley Town

FA Cup over for Chelsea and Crawley Town 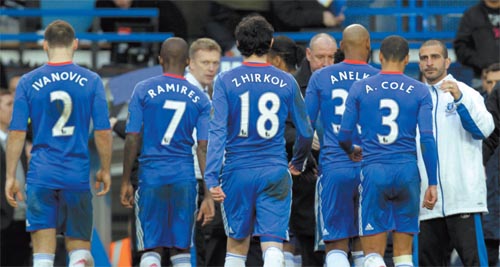 
LONDON - Phil Neville scored the decisive spot kick to give Everton a 4-3 penalty shootout win over Chelsea after their FA Cup fourth-round replay ended in a 1-1 draw after extra time at Stamford Bridge on Saturday.

Neville sent goalkeeper Petr Cech the wrong way after Chelsea fullback Ashley Cole blasted his penalty high and wide as Everton ended the Londoners’ dreams of becoming the first club in 125 years to win the FA Cup three times in a row.

The fairy-tale run of minnows Crawley Town also ended, although the non-League side left Old Trafford with their heads held high after only losing 1-0 to Premier League leaders Manchester United in their fifth-round tie.

Crawley, bidding to become the first team from outside the League to reach the last eight in 97 years, fell behind on a 28th minute header by Wes Brown but almost equalized in stoppage time when Richard Brodie headed against the top of the bar.

Stoke beat League One leaders Brighton by the same score with goals from John Carew, Jon Walters and Ryan Shawcross. After the win over Chelsea, Everton captain Neville told the BBC: “I knew I was going to score, I knew where the ball was going to go - and that’s half the battle.

“We’ve been practicing penalties all week. The manager just told us to hit them as hard as possible. My biggest worry was that there was a big divot in the penalty spot. Petr Cech looks really big but luckily he dived the wrong way.”

After a goal-less stalemate in 90 minutes of end-to-end football, Chelsea took the lead in the last minute of the first period of extra time when midfielder Frank Lampard scored with a low volley from 25 feet out.

With a minute of extra time, Leighton Baines equalized with a left-footed free kick to force the match into a shoot-out. Everton trailed 2-0 on penalties after Lampard and Didier Drogba converted their spot kicks and Baines saw Cech save his penalty.

Phil Jagielka scored to pull Everton back to 2-1 before Chelsea’s Nicolas Anelka, taking virtually no run up, had his spot kick saved by Everton goalkeeper Tim Howard, and Mikel Arteta scored to make it 2-2.

Michael Essien and Johnny Heitinga made it 3-3 before Cole missed and Neville scored to give Everton its stunning victory and end Chelsea’s hopes of emulating Blackburn Rovers, the last team to win the Cup three years in a row in 1884, 1885 and 1886.

Everton now faces Championship (second division) Reading in the fifth round at Goodison Park on March 1.

The most intriguing tie of the round was at Old Trafford where Crawley seemed to grow in confidence as the game went on.

United was never able to relax against the visitors, who had already seen off three League teams on their way to this stage, and with more luck could even have forced a draw.