Vaccines could have stopped FMD

Vaccines could have stopped FMD 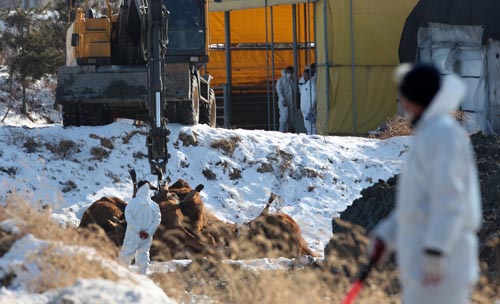 
To protect less than $2 million worth of meat exports, the government has turned the country into a massive graveyard of farm animals.

Since foot-and-mouth disease broke out in November, more than 3.3 million cows and pigs have been slaughtered, livestock farmers have suffered emotionally and the country is stuck with a bill of trillions of won to compensate farmers for culled animals. Much of this could have been avoided if the government had chosen the more effective and less costly solution of vaccination instead of killing cattle and pigs.

But when vaccinations are used, the country loses its vaccine-free status, which makes its meat exports less desirable.

“Exports? What exports are we talking about?” asked a farmer named Park, 60, in Yangpyeong, Gyeonggi. “We produce barely enough meat for domestic consumption. There is no beef available for export.

“I buried all my cattle on Jan. 10,” Park said, describing what he said was the most devastating experience of his life. “I wish we had vaccinations early, but by the time the government made the decision, it was already too late.”

Said Woo Hee-jong, a professor of veterinary medicine at the Seoul National University: “Defending the FMD-free status without vaccination for exports is such a lame excuse. That’s just to cover up the failure of having missed the timing for vaccination.”

The country’s worst outbreak of the deadly epizootic dates back to a suspected case in Andong, North Gyeongsang, discovered on Nov. 23, 2010. But the order to vaccinate all farm animals in the nation only came on Jan. 12. During the intervening weeks, the deadly and highly contagious virus swept the country, resulting in the livestock slaughter.

What went wrong? Possibly everything.

When the outbreak was officially declared by the National Veterinary Research and Quarantine Service on Nov. 29, the virus had already spread to farms around the nation because of a delay in confirming new cases. By the time the outbreaks swept Gyeonggi and Gangwon, health authorities on Dec. 22 approved the “ring vaccination” for cattle - not pigs - around infected farms. Under the measure, cattle in areas near an outbreak received vaccinations.

Vaccinations for cattle began in Gyeonggi and North Gyeongsang on Jan. 1, but the disease was still spreading. The government then decided to vaccinate pigs and began the process on Jan. 6.

Unable to contain the outbreaks, an urgent order was issued on Jan. 12 that all pigs and cattle around the nation should be vaccinated.

According to analysts, the decision came too late. The Ministry for Food, Agriculture, Forestry and Fisheries said the delay was to protect Korea’s status as a country free of the disease without vaccination.

Because countries that are recognized by the World Organization for Animal Health (OIE) as FMD-free without vaccination have the greatest access to export markets, culling has long been the first response of the Korean government to FMD outbreaks.

Analysts and farmers, however, say the policy is absurd because the country’s livestock industry produces meat almost entirely for domestic consumption.

Seoul National University’s Woo said when the disease reached Gyeonggi on Dec. 15, experts already worried that it was too late to contain it with slaughtering.

“The government did not have a manual on how to handle the situation with vaccinations, so it just went ahead slaughtering animals,” Woo said. “If we go by the government’s logic, the cost of defending meat exports of 2 billion won is now trillions of won.”

The decision to vaccinate cattle first - while pigs are about a thousand times more prone to spreading the virus than other animals - also showed the government’s lack of preparation and understanding, Woo said.

Lawmakers from both ruling and opposition parties also criticized the government’s decision to delay the vaccinations.

“Over the past five years, while Korea was an FMD-free country without vaccination, pork exports stood at 83 tons in 2005, 1,424 tons in 2006, 191 tons in 2007, 269 tons in 2008 and 549 tons in 2009,” said Representative Koh Seung-duk of the Grand National Party. “Total exports for the five years is about $9 million. There is no economic gain in culling millions of animals to protect a small amount of exports and spending 2 trillion won for compensation and disinfection measures.

“And the mass culling will also bring about secondary effects for the livestock economy because meat imports will snowball. Last year alone, the U.S. beef imports nearly tripled,” Koh added.

Representative Kim Hyo-seuk of the Democratic Party has also criticized the government’s shortcomings. In an interview with CBS radio, Kim said the government failed at every step to combat the disease.

“The preparation manual was insufficient,” he said. “And quarantine measures at the border and initial responses and disinfection were lacking, not to mention the vaccination process. Every step was careless and unsatisfactory.”

Kim said the more serious problem is that the government is unprepared even after 10 years of outbreaks.

Woo of Seoul National University said the manual for handling outbreaks is faulty. When an outbreak occurs on a vaccinated farm, only the infected animals will be culled under the current guidelines, but Woo said it may be necessary to slaughter the entire population, given that farms are densely populated and the nation is tightly linked by highways and railroads.

“FMD is a very tricky and hard-to-fight disease, and the decision on culling should be made by experts who survey the sites,” he said. “There cannot be a uniform solution.”

He also said the government’s FMD-control manual has long been outdated, failing to reflect rapid industrial developments, the changed conditions of the disease and environment and the newest veterinary medicine information. “Since 2000, vaccination and slaughtering were used simultaneously to handle FMD, but obviously it was not incorporated in the government’s manual in time,” Woo said.

Park, the farmer from Gyeonggi, said the vaccination system should be changed to allow farmers to administer the vaccines.

“Right now, only veterinarians are allowed to give the shots,” he said. “There are not enough veterinarians to go around, and timing is everything during an outbreak. Farmers should be educated and trained to give the vaccination when an emergency arises.”

Some government officials admit their shortcomings in handling the outbreaks. “We’ve been blinded by the meaningless international reputation [of the FMD-free status without vaccination] and tiny exports,” said a senior government official. “The time has come to seriously reconsider our priorities in the livestock industry.”