Thunders coach is all worries as team falters

Thunders coach is all worries as team falters 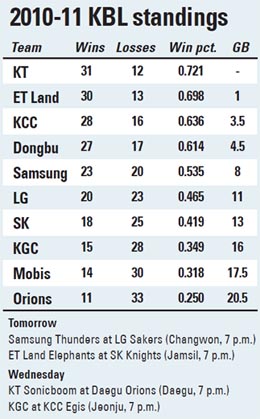 The Samsung Thunders have all but secured a spot in the postseason but head coach Ahn Joon-ho is all worries these days.

Samsung sits fifth overall in the 10-team KBL at 23-20, but it has showed mere flashes of its offensive capability and has been struggling of late.

It was Samsung’s third consecutive loss but more importantly, Samsung led the game in the first three quarters before falling behind and losing in the fourth. The biggest problem for Samsung is on offense. While Samsung had averaged 82.3 points per game this season until seven games ago, the team’s scoring average has dipped to 66.7 points per game since then. That’s lower than the Dongbu Promy’s stagnant offense, which averages 74 points per game, the lowest in the league.

“Samsung’s offense is based on speed and two-on-two plays instead of post-up plays in the paint,” said SK head coach Shin Sun-woo. “Such style of play is prone to inconsistencies.”

Teams like the ET Land Elephants, KCC Egis and Dongbu Promy feature talented centers and forwards and have offenses based on strong front-court play. With their offenses less dependent on perimeter shots, such teams tend to have steady offenses and have not had any significant losing streaks this season.

One Samsung player who has been struggling the most lately is Aaron Haynes. The 29-year-old forward is averaging 24.2 points and 8.6 rebounds this season but has averaged a mere 13.3 points in the past six games.

With Lee Seung-joon and the big men failing to provide strong play in the low post, Samsung’s guards and forwards are forcing shots from the perimeter. But it’s hard to win when any team connects on 40 percent of its shots, as Samsung has done in its past three games.

To add to the Thunders’ offensive woes, the team is dealing with less than favorable team chemistry. Captain Lee Kyu-sup has been disgruntled with fewer minutes and veteran guard Kang Hyuk has been dealing with injuries and fatigue and has not been able to provide veteran leadership on the court. It’s one of the reasons why the entire team, and more specifically its offense, has been shaky of late.

“I want more energy from our players and we need spirited plays but all our players are fatigued,” said Ahn. “We need a floor leader to encourage and push the younger players.”

Said a Thunders official: “Although we’re no longer in the fight for the top spot in the league standings, we have pretty much secured a spot in the playoffs and I think that has resulted in some sloppy plays of late.”

Samsung holds a comfortable lead for the one of the six playoff spots but in a worst case scenario, Samsung can still miss the postseason. They currently sit in fifth place and as of Monday hold a three-game lead over the sixth-place LG Sakers and five games ahead of seventh-place SK. The top six teams in the KBL make the playoffs and with 11 games remaining, it is technically possible for the Thunders to fall out of the picture. And with a tough schedule ahead, Samsung faces the possibility of extending its losing skid when it faces top-ranked ET Land and KCC later this week.