The biggest fight of his life

The biggest fight of his life 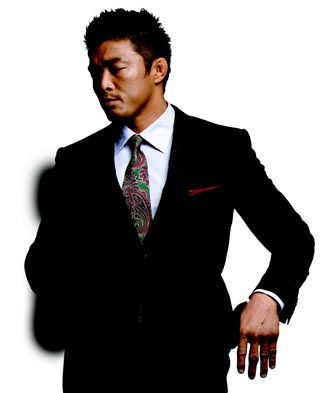 TOKYO - The Korean-Japanese football player Lee Chung-sung, known as Tadanari Lee in Japan, reminded Koreans of their country’s racist tendencies when he gave up his Korean citizenship to contribute to Japan’s Asian Cup victory last month.

The 26-year-old confessed that he chose to abandon his Korean citizenship and become Japanese in 2007 after being called a racial slur by teammates on the U-19 Korean team.

The experience isn’t unique to Lee. Choo Sung-hoon - known as Yoshihiro Akiyama in Japan - is also a fourth-generation Korean-Japanese and is a K-1 UFC fighter.

The JoongAng Ilbo visited the 35-year-old Choo at his studio in Hiroo, Tokyo, on Feb. 8 to talk about his identity and thoughts about his fellow Korean-Japanese.


Q. Have you heard about the Lee Chung-sung story? 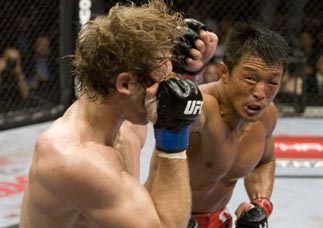 A. I think I can understand how he feels. He might have wanted to continue the sport as much as I did. I also got this feeling that Korea’s sports community hasn’t changed much compared with 10 years ago. Such (discrimination) still persists under the surface.

Is racism confined to Korea? Doesn’t Japan have its fair share?

It is not really a matter of it being only in Korea. Discrimination probably exists in fields other than sports. But the problem has surfaced because a large number of Korean-Japanese athletes from Japan want to play in Korea. I hope Korea’s sports community accepts them. It would be beneficial not only to the individuals, but Korea.

Didn’t your parents oppose your decision to become Japanese and drop your Korean citizenship?

(When changing his nationality, he made the claim that referees were so biased that it was impossible for him to win matches decided by them. He also said however hard he tried, he had no future here. His remarks shocked Korean society. - Ed.)

I wanted to continue judo. But I couldn’t represent Japan with Korean nationality. I thought nationality didn’t matter if only I could keep doing my sport. My ancestors came over to Japan from Jeju Island about 100 years ago. My mother was born in Siheung, Gyeonggi. My parents supported me in my quest to change my citizenship if that was my wish. But my parents and sister still retain Korean nationality. 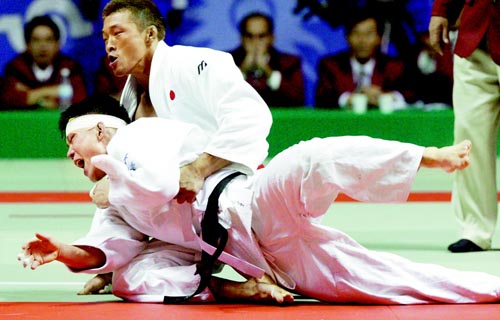 Choo wins a gold medal in judo at the 2002 Busan Asian Games.


Lee Chung-sung retained his surname when he became Japanese. Is there a reason you didn’t?

The rules at the time didn’t allow me to retain my Korean surname. So I set it as Akiyama (which has the Chinese character pronounced as Choo). It is fortunate that keeping a Korean surname is (now) possible.

What would your advice be to Korean-Japanese considering taking Japanese citizenship?

An increasing number decide to become Japanese because they don’t know the Korean language and have no choice but to continue residing in Japan. I would recommend they choose to become Japanese if they have a firm goal and cause, like I did. I would tell them to take the decision seriously.

In the past, there were many Korean-Japanese who hid their Korean descent. But you and Lee are confident in your identity.

It is true that Japan became more open compared with the past. But discrimination against Korean-Japanese still persists. Although it will mitigate in the future, racism will never be uprooted. Even so, hiding your origin is a cowardly act of denying your roots. I think you should never keep your Korean ancestry a secret if you choose Japanese citizenship.

There are a lot of Korean-Japanese who are going through an identity crisis.

Many people say so. But I can feel that they also love their own country, regardless of whether the country is Japan or Korea. Just because you chose citizenship of one country, that doesn’t mean you hate the other country. You just love both countries.

Is that why you wrote a biography entitled “Two Souls”? 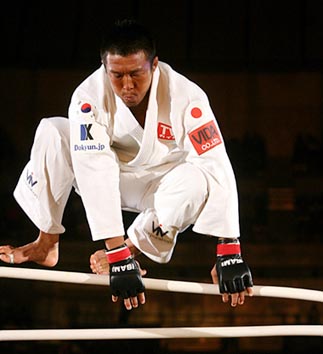 At his K-1 matches, Choo wears both a Korean and Japanese flag on his uniform. Provided by the JoongAng Ilbo

“Two Souls” refers to my past and what I want to do in the future. I wrote in the book that though I was born in Japan I love both Korea and Japan. I also expressed my hope to serve as a bridge between the two nations.

Is that why you have both Korean and Japanese flags on your uniform?

It is out of my wish that Korea and Japan become closer friends.

There should be advantages for being a Korean-Japanese.

It’s a plus for us that we can see the good and bad of both countries. We can traverse barriers and become a bridge between the peoples of the two nations. I haven’t established detailed plans, but I’d like to do some work toward such ends.

What is the major difference between Korea and Japan?

Koreans are very warm and emotional. I like Koreans for that. Japanese are quick and fair judges.

Do you have plans to form a Korean-Japanese gathering to contribute to Korea-Japan ties?

It won’t be easy to launch such a meeting, but I think that is a brilliant idea.

You have many fans in Korea.

Yes. About 10,000 members of my fan club are in Korea. My friend in Busan is the manager of the club. I have had two matches in Seoul, and many of my fans came out to watch.

Do you come to Korea often?

About once a month for commercial and television appearances. I recently made a cameo in a TV drama. Working in Korea is very fun. I am also thinking about launching a business, but it will take a long time.

There are many things that you may be able to do for Korean-Japanese people - including a movement to allow foreigners to vote. Have you thought about becoming a politician?

No. I am not a good talker. But I want to do a movie or drama if there is any chance.

You became a K-1 fighter in 2004. Have you considered retirement?

In terms of age, I am in the middle of the pack among K-1 fighters. There are some who fight after turning 40.

How do you train?

I opened a 230-square-meter (2,476-square-feet) gym about 18 months ago near my residence, where I teach judo and K-1. I practice about four hours per day. Since I originally started with judo, I also practice boxing and it’s hard.

Your wife is Japanese and is a model. Is it nice to be living with a beautiful woman?

She is still modeling. We have not had any children yet.

We met through a mutual friend and I am grateful for that.

She makes meals for me and gives me a lot of advice. She is a very precious person to me. She also accompanies me to matches.

You are renowned for being a good dresser.

I love clothes. I try to dress well.