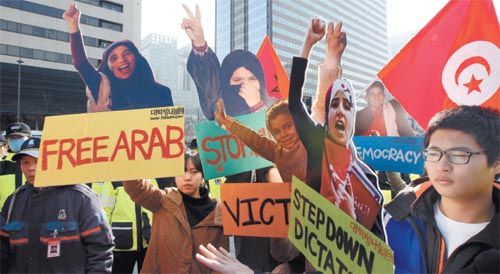 A liberal student group shows its support for Arab democratic movements at Gwanghwamun Square, central Seoul, yesterday. About 30 members of the Nanum Munhwa (Sharing of Culture) student group held banners and cutouts of Middle East protesters and chanted slogans in Korean, English and Arabic, such as “Freedom to Arab citizens” and “Tyrants must step down.” They also said Korea’s democratization was achieved after 30 years of struggle against military regimes and the world’s support at the time had helped greatly. They said it is now Koreans’ duty to back the democratization movements in the Arab world. [YONHAP]