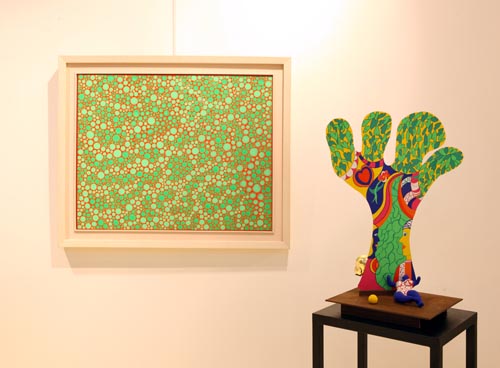 The painting “Dots Obsession (Zoxa)” (2005) by Yayoi Kusama and the sculpture “L’abre de vie #74-75” by Niki de Saint-Phalle are part of the “Ladies of Legend” exhibition at Opera Gallery.


January and February are known as the slowest months in the local art world. Private galleries don’t arrange many new exhibitions during this time because collectors tend to become frugal after the Christmas and Lunar New Year holidays, gallery representatives say. The same has been true this year.

But judging by the three new exhibitions at galleries in Cheongdam-dong, southern Seoul, one of the city’s major districts for art, the slow season is finally coming to an end.

PKM Trinity Gallery’s exhibition “TEXT/VIDEO/FEMALE: Art after 60s” opens tomorrow. With 21 works, the scale of the show is rather small, but the names of the participating artists are big. The names include Louise Bourgeois, Paul McCarthy, Bruce Nauman, Paik Nam-june, Martin Creed and Tracey Emin. With their participation, the show offers an overview of contemporary art since the 1960s.

“The adoption of text into fine art, the use of video as new media and the active emergence of female artists are the keys of contemporary art,” Park Kyung-mi, PKM Trinity Gallery’s director, said about the title and concept of the show. 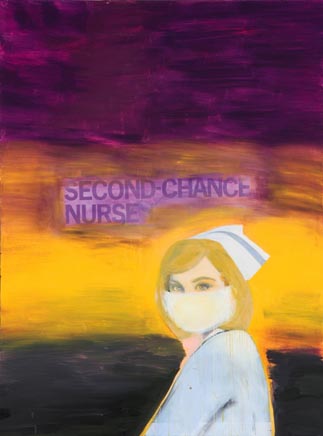 “Second Chance Nurse” (2003) by Richard Prince is part of the “TEXT/VIDEO/FEMALE: Art after 60’s” exhibition at PKM Trinity Gallery.

Those who saw Oliver Stone’s 2010 film “Wall Street: Money Never Sleeps” may recognize the painting “Second Chance Nurse” by American artist Richard Prince, which is part of the exhibition. The painting, which appears in the film, is part of the artist’s well-known “Nurse” series that was inspired by the titles and cover art of pulp fiction. According to the gallery, Prince used inkjet printing to transfer the images of the book covers onto canvas. He then painted over them with acrylics.

Meanwhile, Opera Gallery will show works by two of the world’s most popular female contemporary artists beginning on March 10.

The gallery juxtaposes the vivid paintings and sculptures of Japanese artist Yayoi Kusama, who has described herself as an “obsessive artist,” with the vivid sculptures of French artist Niki de Saint Phalle.

“[The two artists] share common points,” the gallery said in a statement. “Both of them suffered abuse in childhood and sublimated the trauma into art. And the two greatly improved women’s status in the art world.”

Lastly, MC Gallery, located at the midpoint between PKM Trinity and Opera Gallery, is running an exhibition featuring the well-known English land artist Richard Long. The exhibition continues through April 2.

“Vermont Georgia South Carolina Wyoming Circle” (1987) by Richard Long is on display at MC Gallery. Provided by the artists and galleries


Long is known for his walks through and respect for nature. He arranges objects, such as stones and fallen tree branches, into certain shapes on the spot and takes pictures of the resulting sculpture. Sometimes, he brings the objects into a gallery and rearranges them in order to bring viewers closer to nature.

His installation, “Vermont Georgia South Carolina Wyoming Circle,” which currently fills the gallery’s narrow first floor, is made of red, white, gray and green stones that he gathered in various parts of the United States.

*“TEXT/VIDEO/FEMALE: Art after 60s” starts tomorrow and runs through March 23. Admission is free. The gallery is open from 10:30 a.m. to 6 p.m. Mondays through Saturdays. The gallery is in the Trinity Place building across the street from the Galleria Department Store’s east wing in Cheongdam-dong. Call (02) 515-9496 or visit www.pkmgallery.com.

“Ladies of Legend” starts on March 10 and runs through April 10 at Opera Gallery, on the first floor of the Nature Poem building near the Cheongdam crossroads. Admission is free. Hours are 10 a.m. to 7 p.m. Mondays through Saturdays. Go to Cheongdam Station, line No. 7, exit 9, and walk for 10 minutes. Call (02) 3446-0070 or visit www.operagallery.com.

The Richard Long solo show continues through April 2. Admission is free. Hours are 10:00 a.m. to 6:00 p.m. Mondays through Saturdays. MC Gallery is located between Galleria Department Store and the Nature Poem building. Call (02) 517-4088 or 9088 or visit www.gallerymc.com.