The stupidest spies in the world

The stupidest spies in the world 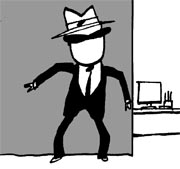 Right after World War I broke out, the German intelligence service recruited a beautiful Dutch woman, a divorcee who once worked as an exotic dancer at the Moulin Rouge in Paris. Her mission was to approach high-ranking officers of the Allied Forces. Meanwhile, the French were interested in her because she had the qualifications of a spy - beauty, intelligence and eloquence. Without knowing she was working for Germany, they asked her to get intelligence on the Germans, leading her to a life as a double agent. The Germans, however, grew suspicious of her routine and fired her. Then they leaked a coded message to the French that she was a German spy. In the end, she was arrested in Paris on charges of treason and was shot to death on Oct. 15, 1917. That’s the story of Mata Hari, which means “eye of the day” in Malay.

There are few stories more interesting than that of a bizarre espionage incident, because a spy’s life is often more dramatic than fiction. Although Richard Sorge was arrested right before World War II, he was a Soviet spy who contributed greatly to the victory of the Allies. After working in Shanghai from 1930 until 1933, he moved to Japan and worked as a spy for nine years until his arrest in 1941. He first established a friendship with the German ambassador to Japan. Then he achieved the feat of collecting intelligence on Germany’s plan for the invasion of the Soviet Union. He was arrested because a Japanese communist party member who worked with him betrayed him. Three years later, in 1944, he was executed at the age of 49.

Not all spies are executed. Anna Chapman, a Russian beauty, moved to London and married a British citizen. Then she spied for Russia in the United States. She was arrested by the FBI but was deported to Russia last July, together with nine other Russian spies, in exchange for four spies in Russia who worked for the U.S.

Nowadays, in a democratic country, invasions of privacy are illegal. And industrial spies who steal information from a rival company are punished. But every country engages in espionage to protect their national interest.

The whole country is stirred by the news of an incident in which three unidentified agents, presumed to work for the National Intelligence Service, broke into a hotel room where an Indonesian envoy was staying. I doubt whether they really can be called spies. If that is the level of our intelligence, it will only bring the country disgrace.