[INTERVIEW] An architect of financial stability

[INTERVIEW] An architect of financial stability 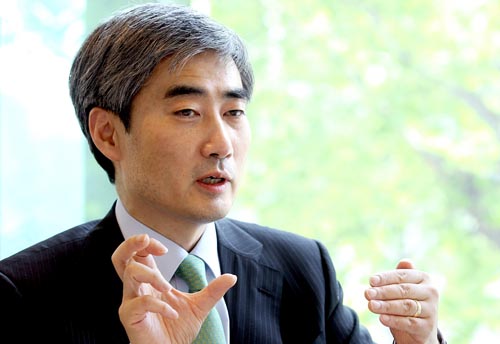 
NEW YORK CITY - The Korean government is planning to impose a bank levy - formally known as a macro-prudential stability levy - on non-deposit foreign currency liabilities starting in the second half of the year. The policy has become known as the “Shin Hyun-song law" after the Princeton University economics professor who designed the policy to curb excessive capital flows and promote stability in the financial system.

In an interview with the JoongAng Ilbo, Shin said the new rule will be applied first to banks since “they represent a large portion of the foreign currency business and thus are a major source of systemic risk affecting the financial system and economy.”

Shin said that although the global economy has recovered from the financial crisis, Korea and other countries should consider imposing such levies to prevent another international financial meltdown.

Born in Daegu in 1959, Shin earned a doctorate in economics from Oxford University. He taught at both Oxford and the London School of Economics and Political Science before moving to Princeton in 2006. He has served as an adviser to the Bank of England and is also a member of the Financial Advisory Roundtable at the Federal Reserve Bank of New York. Shin also served as President Lee Myung-bak’s chief adviser on the international economy.


Q. How is macro-prudential policy different from existing financial policies?

A. Whenever a financial crisis hits, authorities so far have only been concerned about the stability of individual banks. The major measuring stick to determine the financial health of banks was the Bank for International Settlements capital adequacy ratio (BIS ratio). To reduce bad loans to stabilize financial conditions, banks had to focus their efforts on loan withdrawals because the BIS ratio is the most widely used method of determining financial stability. This can result in another economic slump. Macro-prudential policies are concerned with the stability of the financial system as a whole, not with the stability of individual banks. Instead of relying solely on the BIS ratio, banks should increase their capital base. Thus banks will be able to increase their loan capability, maintain capital flows and avoid economic downturns.

Why are macro-prudential policies focused on regulating banks instead of non-bank financial institutions?

Is that a reason why the macro-prudential stability levy was born?

Micro-prudential policies and macro-prudential policies are complementary. In the case of Korea, which maintains a small open economy, it is hard to maintain sovereignty over monetary policies. U.S. short-term capital will flow at an excessive rate into Korea if the Korean government raises its interest rate while the U.S. maintains low interest rates. This could affect Korea’s open market interest rate and the government’s monetary policy will lose its effect. In a situation like this, it’s hard to use monetary policy to prevent speculative investments. There should be controls on short-term foreign currency liabilities like the macro-prudential stability levy.

Isn’t the case of the euro zone the same as Korea when it comes to sovereignty over monetary policies?

Yes. That’s why the euro zone needs macro-prudential policies. If Spain and Ireland quickly restricted bank loans by implementing the loan-to-value ratio and the debt-to-income ratios, they wouldn’t have suffered like this. In the past, many saw such restrictions as an act of government intervention in the financial market, but things have changed. Now there’s a consensus on the need for government intervention.

Some economists say the recent financial crisis will affect the status of the U.S. dollar as the key international currency.

Their views are correct since the U.S. dollar is the main currency for trade and a safe haven currency of last resort. Moreover, the status of the dollar has increased since it is the currency that underpins the global financial system. The United States is the largest debtor nation. But U.S. banks are the world’s biggest creditors.

There are 160 foreign banks on Wall Street. Their job is to borrow U.S. dollars and provide them to Asia and Europe. At the end of 2009, such capital was around $600 billion. If a crisis breaks out, the banks withdraw the dollar loans and bring them back to the U.S. That’s why the value of the U.S. dollar goes up every time there is a crisis. On the macroeconomic level, the U.S. runs short-term loans by using its long-term treasury bonds. As long as this system continues, the dollar’s status will remain the same.

Is this the reason why U.S. monetary policy affects the Korean economy?

Right. When the Federal Reserve injects money into the market with quantitative easing, the money comes to the Korean market from foreign banks on Wall Street. That’s why the G-20 member countries criticized the U.S. quantitative easing policy.

Savings banks in Korea are in crisis.

Savings banks play a crucial role for ordinary people when conditions for bank loans were tough in the past. But with excessive cash flows, the importance of savings banks isn’t the same as it used to be. That actually forced many savings banks to make property investments with project financing loans, which increased their bad loans. We need to be cautious about the short-term liabilities of savings banks.