Scent of revolution around the world

Scent of revolution around the world 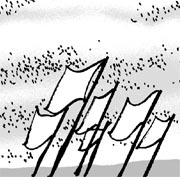 King Xuan of Qi asked Mencius, “Is it acceptable for a subject to overthrow or even kill a ruler?” Mencius replied, “If the king lacks benevolence, he will be called a villain. If he is not righteous, he will be called a thief.” In that case, the ruler is no longer a king, but an ordinary man. He justified the coup of the wicked kings Jie and Zhou by King Tang of Shang and King Wu of Zhou, respectively, by invoking the mandate of heaven. According to history, the coup was a revolution carried out by Tang and Wu, both of whom were rebelling against a tyrant.

Karl Marx called revolution “the locomotive of history.” He has a point. A society that has become stagnant under a dictatorship will shift to a new system if the public erupts and uses its power to create change.

In the West, revolutions are known by various names. The Glorious Revolution of England got its name because civil rights were obtained through a bloodless revolution. The American Revolution was meaningful in that it broke the shackles of the colonial era. The French Revolution is often called the Great Revolution because of its great influence on history.

In Korea, our revolutions are by the numbers, therefore the names are neutral. The student uprising of April 19, 1960, is called 4.19. I wonder whether that is because the definition of revolution changes when the government does. For example, the character of 5.16 changed from a revolution to a coup d’etat, while 5.18 went back and forth between being an uprising and a movement.

Nowadays, democracy movements around the world are named for flowers. Maybe that’s because the fragrance of a flower spreads even if it is contained, and the same is true of a revolution. A good example is the Rose Revolution of Georgia that brought about a change of power in 2003 as citizens holding roses staged rallies in the streets. That was followed by the Orange Revolution of Ukraine in 2004 and the Tulip Revolution of Kyrgyzstan in 2005.

These flower revolutions have now spread to the desert. At the end of last year, the Jasmine Revolution broke out in Tunisia. Jasmine, a genus of shrubs and vines in the olive family, blooms in the spring. Because of that, the scent of jasmine brings a touch of spring to the frozen land of dictatorship. Jasmine spread to Egypt to force Mubarak to resign and has traveled to Libya. I sincerely hope the jasmine will continue to bloom after overcoming the sandstorm.