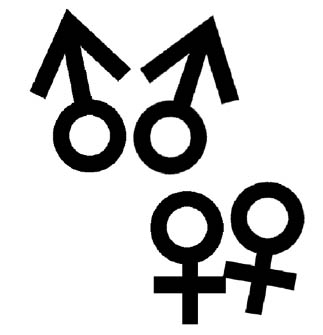 Last October, U.S. Secretary of State Hillary Clinton appeared in a video for the “It Gets Better” project, aimed at giving hope to young people who are lesbian, gay, bisexual or transgender. The project was launched after the death of Ashe Brown, a 13-year-old who shot himself, and Taylor Clementi, an 18-year-old who jumped off a bridge. Both were ostracized for being gay.

In the video, Clinton expresses sorrow for the deaths and asks people to overcome their bigotry and hatred against members of the LGBT community. In addition, she encourages young people who are ostracized or isolated for being gay to “hang in there” and “ask for help.”

Homosexuality has always existed. During the Greek and Roman era, homosexuality was a general social phenomenon. In modern times, a survey of 5,300 men conducted by Alfred Kinsey in 1948 showed that some 13 percent of men between 16 and 55 were gay and 4 percent of them identified as gay throughout their life.

The history of homophobia is as long as that of homosexuality. The Book of Leviticus condemns homosexuality as a hateful crime and in Rome it was illegal.

Homophobia victimizes teenagers who are gay and makes them think that it is better to die than to be gay. That makes their suicides a product of internalized homophobia.

It is said that a person knows he or she is gay between the ages of 10 and 18. But this is the period when most teens feel confusion about their sexual identity, because a bisexual tendency lingers on. Therefore, they should not decide their sexual identity prematurely and rush to homosexuality. Young people who identify as gay are prone to physical and verbal abuse from peers and adults alike. That’s why so many young gays give up school, get into drugs or run away from home.

Recently, 12 Korean teenagers who were part of an Internet group for gay teens were arrested for attacking two former members who had quit the group and started trashing it and gay people online. Ten of the 12 attackers are in middle school. Whether they joined the group out of a delusion about their sexual identity or something else, their actions cannot be justified. As heterosexuals are punished for committing sex crimes, so should they be punished if they are in the wrong. In reality, however, the responsibility lies with the adults in their lives, who neglected them by thinking that homosexuality among teenagers is nothing new nowadays.