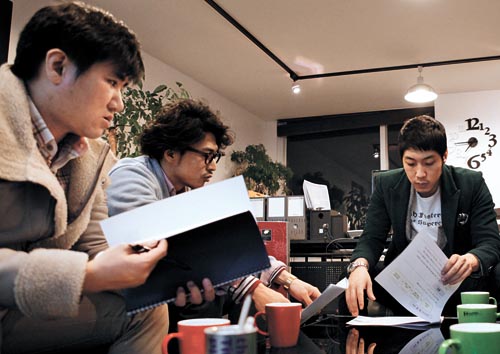 
Park Jun-seong is a third-year university student, fashion guru and millionaire. Now he can add philanthropist to that list.

Park is the founder of Bugun FNC, a company that runs two online shopping malls, including mutnam.com.

The economics major has close to 100 employees and his company pulls in 23 billion won ($20.3 million) a year in revenue.

Park graduated from high school in Busan before enrolling in a college of mechanical engineering.

Soon after, he changed course and decided to move to Seoul for higher education.

Not long after being accepted to Kookmin University, Park said he became preoccupied with his future.

“When I entered university, the high unemployment rate was a serious matter among students,” Park said. “After I witnessed the unemployment crisis force my friends into taking positions at companies they did not actually want to work for, I decided I had to run my own business.”

With self-confidence and a solid business plan, the fashion savvy Park launched an online shopping mall targeted at men in 2004. His start-up capital amounted to just 700,000 won, which he borrowed from his older sister.

Instead of rushing into a saturated market, Park launched a fashion Web site to brand himself. He created a community that discussed trends and suggested coordinating outfits - promoting himself as a fashion expert.

“A year after I started the community, members said now was the time to launch an online shopping site,” Park said.

The secret to Park’s success is precise planning.

He set weekly goals for attracting visitors to his Web site. He also organized his company into divisions for effective management.

“Many people have asked me for advice on running an online business, but most of them don’t even have a business plan,” Park said. “They have to map out a specific plan, not a vague notion of it.”

As a young venture businessman, Park said he plans to start a training program to help young entrepreneurs.

“I will establish a training organization to educate people on e-commerce management,” Park said. “I want to dedicate myself to creating a better society where people can reach their potential as long as they do their best.”

Park, whose next goal is to take his fashion brands global, has some advice for would-be online business founders.

“You need to analyze the competitiveness of your business plan. Then, maintain your passion and do not fear failure,” he said.