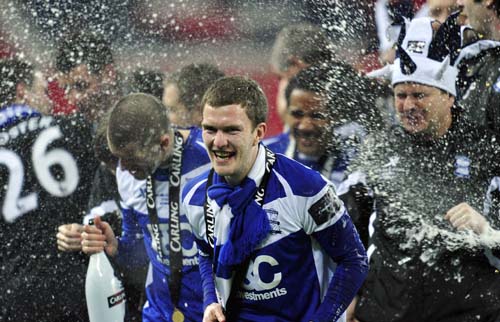 LONDON - Birmingham ended a 48-year wait for silverware by upsetting Arsenal 2-1 with a last-minute winner in the League Cup final, while Manchester City’s Premier League title push took another blow with a 1-1 draw against Fulham.

Nigerian striker Obafemi Martins took advantage of a defensive mix-up to stroke the ball into an empty net and earn Birmingham only its second major trophy after a League Cup triumph in 1963.

“We weren’t given a prayer by the pundits and the bookies but we believed today. It was a titanic performance by the players,’’ said Birmingham manager Alex McLeish, whose side is battling against relegation from the Premier League.

Netherlands striker Robin van Persie had canceled out Nikola Zigic’s opener for Birmingham but Arsenal remains without a trophy since 2005, although it still has the Premier League, Champions League and FA Cup to play for.

“I wanted to end our wait for a trophy today,’’ Arsenal manager Arsene Wenger said. “We got what we expected from Birmingham - they are a team who fight very hard and cause a lot of problems from long balls. Congratulations to them, they got the trophy.”

At Eastlands, Damien Duff’s second-half equalizer for Fulham left City 10 points off league leader Manchester United, which also has a game in hand over its crosstown rival.

Mario Balotelli had put Manchester City in front in the 28th minute but Duff’s leveler will give extra delight to Fulham manager Mark Hughes, who was fired by City 14 months ago.

West Ham beat Liverpool 3-1 in Sunday’s other league match to move off the bottom of the table. The defeat ended the Reds’ six-match league unbeaten streak, denying them the chance to move within three points of fifth-place Chelsea. Martins’ winner came after Arsenal goalkeeper Wojciech Szczesny came out to collect the ball after a flick-on by Zigic, seconds before the match went into stoppage time.

Gunners defender Laurent Koscielny went in front of Szczesny and motioned to kick the ball clear, only to pull out at the last second. The ball hit Szczesny’s knee and rebounded out to Martins, who couldn’t miss from 10 yards.

“I think this is the easiest goal I’ve ever scored in my career - and it’s very important,’’ said Martins, who is on loan at Blues from Russian club Rubin Kazan. “I think it was my second touch. I’m very happy.’’

Wenger said he is confident the 20-year-old Szczesny will recover from his late gaffe. “What can you say? You have to be positive because he is a young boy,’’ the French coach said. “He has to pick himself up from that goal and hopefully he can do that.’’

Arsenal last won a trophy six years ago, when it beat Manchester United on penalties in the 2005 FA Cup final.

Meanwhile, City manager Roberto Mancini did not appear to look at counterpart Hughes at the post-match handshake, leading the Fulham manager to pull his hand away.

“I am old-fashioned,’’ Hughes said. “I always think you should offer your hand in whatever circumstances, no matter how difficult it is.’’AP