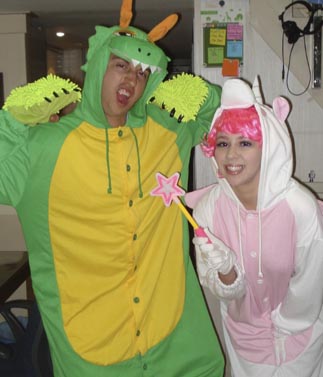 Simon and Martina Stawski dress up for Halloween last October. The couple runs the popular blog Eatyourkimchi.com. Provided by the Stawskis

Simon and Martina Stawski, a Canadian couple living and working in Bucheon, Gyeonggi, are the creative force behind Eatyourkimchi.com, a blog that aims to both educate and entertain foreigners in Korea with a catalogue of more than 200 videos on Korean food, pop culture, life and work.

The videos aim to give visitors a clearer view of living, working and blogging in Korea. There is also a section about Bucheon, the couple’s home base.

“Our focus is on everyday life in Korea,” Simon said. “The T-Card or table bells in restaurants may seem common to Koreans. But to foreigners, they are just amazing.”

Raised in Toronto, the two were eager to live abroad and came to Korea experience a different culture.

“We love living in Korea,” Simon said. “My favorite Korean food changes every month and dwaejigalbi [pork ribs] and ttukbaegi bulgogi [marinated beef in a pot] are my current favorites.”

When they arrived in 2008, the Stawskis, who discovered their love of teaching in Canada, both got jobs at public schools in Bucheon.

And they decided they’d document their experiences in Korea from day one through video, even though they didn’t have any real experience filming.

“Our first video was of us eating sundubujjigae [soft tofu stew] in a restaurant in Incheon International Airport and we were exhausted after hours of flying,” Martina said.

Said Simon: “We wanted to show our families and friends in Canada that we were safe, since North Korea said South Korea would be covered in ‘sea of fire’ right before we came here.”

The videos they make and produce themselves go up twice or three times a week and are now the main feature of the blog.

They said they chose video as their main medium because they felt it would make the information more accessible and there were not many video blogs about Korean culture at the time.

Then they spend another three to four hours rendering the video and another seven to eight hours uploading it to various social media sites.

Some days, they stay up editing and posting their videos until 4 a.m., they said.

But all the hard work has made the blog popular and won them a group of loyal followers, some of whom worry about the couple if they are late or miss a post.

“If we are little late on a Monday, when we usually post a video on K-Pop music, some people write to ask if we are okay,” said Martina.

So, Simon said, the two started posting their videos on social networking sites so they could interact with their viewers.

“We can respond, talk and ask advice and build friendships with viewers.”

But it’s not just videos they post. The frequently-asked-questions section provides written tips on etiquette, how to get a cellphone in Korea, drinking culture and where to buy food.

Another section guides people through the process of finding and owning a pet in Korea, and is based on their own experience of adopting their puppy Spudgy from a local animal shelter.

And, showing the couple’s humorous side, they named the blog after a maxim they learned growing up.

“When you are a kid, you don’t want to eat certain foods like vegetables because they look boring,” Simon said. “But your mom tells you to ‘Eat your vegetables’ since they are good for you,” hence the Korean version “Eat your kimchi.”

The couple soon plans to devote all of their time producing videos on Korea.

“I love teaching and my students are amazing. They study so hard at hagwon at night, but still manage to concentrate on class in the morning,” Martina said. “But I am a monotasker and it takes so much energy to teach and produce videos at the same time.”

When both of them get free from work, they plan to spend their time traveling around Korea and producing videos about the places they visit.

“We want to show the fun parts of Korea - like the street game where you can win a prize - to the visitors of our blog,” Simon said with a laugh.