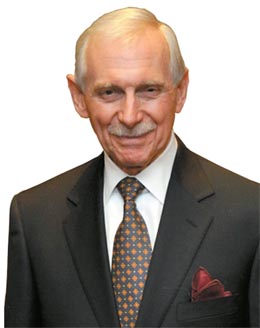 For a more effective and balanced immigration policy, the Korean government needs a control tower that will coordinate between various government bodies, William L. Swing, Director General for the International Organization for Migration said in an interview with the Korea JoongAng Daily on Tuesday in Dokok-dong, southern Seoul.

“If you’re going to have a balanced immigration policy, it will probably be prudent to come up with some way of coordinating various ministries,” Swing said. “Each ministry has a particular mandate and perspective on various tasks such as police, border control, sending people back. But those functions can’t be placed by a single ministry and should be viewed as coordinated functions.”

To coordinate these functions, the problem needs to be tackled by society as a whole, he said.

“You need to talk to NGOs, academic organizations, labor unions and members of National Assembly, which has committees that deal with migration,” he said.

In his four-day visit to Korea last week, Swing visited the IOM Seoul office and met with Prime Minister Kim Hwang-sik and Justice Minister Lee Kwi-nam to discuss ways to develop Korean immigration policy and cooperation between the Korean government and IOM.

The transcontinental IOM was founded in 1951 and aims to facilitate orderly immigrations among countries while helping countries to resolve immigration problems. IOM, which is based in Geneva, Switzerland, currently has 132 member countries.

IOM Seoul, which goes by the name IOM Migration Research and Training Centre, opened in 1997 to deal with the increasing number of immigrants to Korea. Swing said IOM will make effort to share ideas and polices with neighboring countries and look at immigration issues from a domestic and regional perspective.

“Most migrations cannot be resolved on a national basis,” Swing said. “We will hold, in the spring, a meeting in Bali, co-hosted by Australia, Indonesia and Korea, and focusing on the subject of human trafficking. Another forum will be held in the future with Korea, Japan and South Asian countries and will focus on labor migration.”

At the meeting with the director on Monday, Prime Minister Kim expressed his hope that IOM would expand its role in immigration matters. “In order to overcome the low birth rate and aging population in Korea and accept more immigrants, we hope IOM will play a pivotal role in supporting immigration policy and work with government offices,” Kim said.