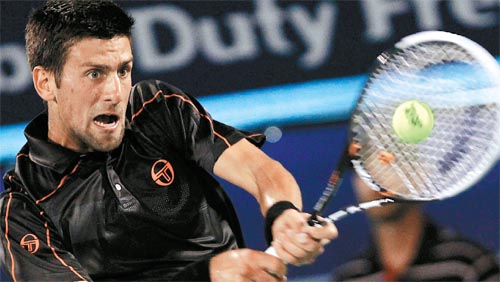 Serbia’s Novak Djokovic returns the ball to Roger Federer of Switzerland during the final of the Emirates Dubai ATP Tennis Championships in Dubai, the United Arab Emirates, on Feb. 26. [AP/YONHAP]


DUBAI, U.A.E. - Novak Djokovic defeated Roger Federer for the second time in a month, with a 6-3, 6-3 victory Saturday for his third consecutive Dubai Championships title.

Djokovic extended his unbeaten streak in 2011 to 12 matches with his 20th title. The third-ranked Serb also beat Federer in the semifinals of the Australian Open to go on to win that trophy.

“I was aware of the challenge that is expected of me on the court, and I was aware of the fact that I need to be on top of my game in order to beat Roger,” said Djokovic, who was taken to three sets earlier in the tournament by Tomas Berdych and Feliciano Lopez. “So the focus was there. I was serving really well, especially the first set. Just the perfect performance overall.”

Federer played by far his worst match of the tournament. He squandered a 3-1 lead in the second set, losing the last five games.

“Well, missed match for me, really,” the Swiss star said. “Started bad and then kind of got into the match, but things are over in a hurry sometimes in best-of-three set tennis.”

Federer didn’t lose a set in the four matches before he faced Djokovic and had a 14-1 record this year. He compared this defeat to the thrashing he gave Nikolay Davydenko to win the Qatar Open in January.

“I must have felt like Davydenko felt in Doha,” he said. “You never really get into the match. If you do, you have no cushion. You just feel like even though you might be in the lead or get yourself together, it’s still never safe.”

Federer leads Djokovic 13-8 for his career, but he lost to the Serb at the last two Grand Slam tournaments, and now in Dubai.

“We’ve had it kind of come and go in spells a bit against each other,” Federer said. “I definitely feel he’s playing well. I thought he was already playing well at the end of last year. We had a couple real close ones. This one has been one of the rather disappointing matches for me against him.”

Federer will keep his No. 2 ranking ahead of Djokovic, who has a simple explanation for his improved play this year.

“I’m a different player in the last year. I have a serve,” he said with a smile. “Last year, the serve was not there and I was struggling a lot. I was using a lot of energy. Now I get to have some free points, which is important.”

Djokovic set the tone early, breaking Federer for only the third time in the tournament to go up 2-1. He then used his serve to take control and went up 5-3. He then broke Federer again to take the set.

Federer made an uncharacteristically high number of unforced errors, especially off his backhand. But he came alive at the start of the second set, breaking to lead 2-1. But Djokovic recovered from 3-1 down, clinching the match when Federer hit a forehand wide.