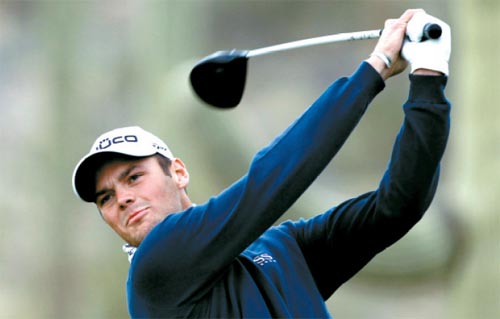 Martin Kaymer of Germany watches his tee shot on the 17th hole during the semifinal round of the WGC-Accenture Match Play Championships in Marana, Arizona on Feb. 26. [REUTERS/YONHAP]


MARANA, Arizona - Martin Kaymer will replace Britain’s Lee Westwood as world number one when the new rankings are published on Monday after the German reached the final of this week’s WGC-Accenture Match Play Championship.

Kaymer, 26, beat American Bubba Watson one up in a tightly contested semi-final match at Dove Mountain on Saturday to ensure he will reach the game’s summit for the first time. Englishman Westwood has been number one since Nov. 1 when he ended Tiger Woods’ unprecedented 281-week reign at the top.

“Definitely, I need some time to think about it,” a smiling Kaymer told reporters after booking his place in Sunday’s 18-hole final against Britain’s Luke Donald. “The good thing is next week I don’t play a tournament, so maybe I can realize what happened.

“But I can say one thing for sure, you know, it’s a very proud moment. Not only for me, for my family, for the people who helped me and for Germany as well.”

Kaymer, who clinched his first major title at last year’s PGA Championship, will become Germany’s second world number one. His compatriot, Bernhard Langer, led the rankings for three consecutive weeks from April 4, 1986 when they were first introduced to the sport.

“It was a long time ago, and to be the second [German] is a nice feeling,” Kaymer said.

Asked who he felt was the world’s number one player, Kaymer replied with a broad smile: “Still Lee Westwood until Monday.”

When asked who would be the best beyond Monday, the German replied: “Well, when the rankings say that I’m the number one, then I’m the best player in the world. And if they say so, then that’s the truth.”

Kaymer, who won four European Tour titles last year before ending 2010 as the circuit’s number one player, said he found it a little distracting to process his world ranking while still competing in a tournament.

“It is a little strange ... when I hear those things, that I’m number one in the world on Monday, and I’m in the middle of the tournament,” he said. “It would be fantastic tomorrow if I could win, then it really feels like I deserve to be the number one. I’m not saying that I don’t deserve it, but it would make me feel better if I would win instead of finishing second tomorrow.”

The German expected his own belief that he had officially become the game’s leading player to sink in later next week.

“Maybe on Tuesday or Wednesday, when I see my name up there, I’ll definitely take a picture of that moment,” he said.

Since clinching his first major title at Whistling Straits in August, Kaymer has won three European Tour titles, most recently the Abu Dhabi HSBC Golf Championship in January. When asked to explain why the floodgates had opened in that time, he replied: “The PGA Championship, that gave me so much motivation and so much belief that I can win any tournament that I play.

“And I think the most important thing was that I kept working on my game, I didn’t stop. I didn’t want to just win once and then kind of like you don’t hear about me anymore. I kept playing and kept winning.

“Did I really know that I can win any tournament that I can play in? My short game has been very good since last year. It has improved big time. I think it’s a mixture and a combination of many, many little parts.”