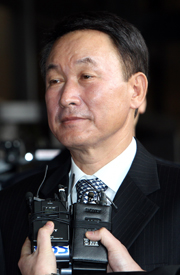 Former National Tax Service Commissioner Han Sang-yool turns himself in to the Seoul Central District Prosecutors’ Office yesterday for questioning about abusing his authority under the Roh Moo-hyun administration. Han fled to the United States in March 2009 when the allegations surfaced, and returned to Seoul on Feb. 24. Prosecutors will focus on Han’s involvement in the “picture lobby,” the “golf lobby” and “Park Yeon-cha gate” under President Roh. By Kang Jung-hyun