Nelly Furtado to give away $1 million Qaddafi fee

Nelly Furtado to give away $1 million Qaddafi fee 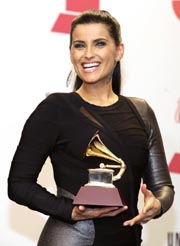 LOS ANGELES - Singer Nelly Furtado said on Monday she will give away the $1 million she received to perform in Italy for the family of Libyan leader Muammar el-Qaddafi.

Qaddafi has been condemned for using violence to quell a popular uprising, with the death toll from nearly two weeks of fighting estimated by diplomats at about 2,000.

Furtado, a Canadian singer whose hits include “I’m Like a Bird” and “Promiscuous,” used Twitter to disclose her plans for the $1 million.