Korea’s own Walk to Canossa

Korea’s own Walk to Canossa 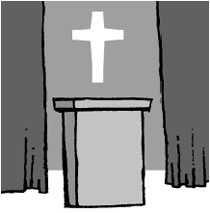 In 1077, Emperor Henry IV of the Holy Roman Empire crossed the Alps and arrived at the castle of Canossa in northern Italy to perform penance to Pope Gregory VII. Gregory, who excommunicated the emperor not long before, was staying in the castle at the time, but the emperor had to stand in the snow outside of the castle for four days without food, wearing only underclothes. Only after Henry knelt before the pope and begged for forgiveness did the pope lift the excommunication. This was the Walk to Canossa, which symbolically established the supreme power of the Catholic Church.

Before the incident, the pope and the emperor had a symbiotic relationship. To expand the Catholic Church, the pope needed the military power of the monarch. In return, the church gave the king the right to appoint clergymen. Gregory, however, wanted to change that, believing the church should be independent from the state to fully restore the rights of the church. So Gregory rescinded Henry’s right to elect bishops in 1075. The emperor then dethroned the pope, and the pope, in return, excommunicated the king. The Walk to Canossa represented the pope’s victory over the emperor.

The history of Europe in the Middle Ages is dotted with wars, as the church and the state were constantly at odds with each other over who would have the upper hand. The English expression, “separation between church and state,” was first used by Thomas Jefferson in a letter sent to a Baptist church in Danbury, Connecticut, in 1802. This principle was later reflected in the country’s constitution and spread to other countries that supported democracy.

Our Constitution stipulates that “No state religion shall be recognized, and church and state shall be separated.” Nevertheless, the Christian Council of Korea threatened the leaders of the ruling party by declaring that the church would launch a campaign against the candidates of the party if it passed a bill that would provide a tax exemption for local issuers of Islamic sukuk bonds. One of the most respected Protestant evangelists in Korea pledged that he would devote his life to toppling President Lee Myung-bak if the government backed the sukuk legislation.

Cowed by the threat, the ruling party postponed the passage of the bill indefinitely, and the president has refrained from making any comment. The 21st century version of the Walk to Canossa is happening in Korea.