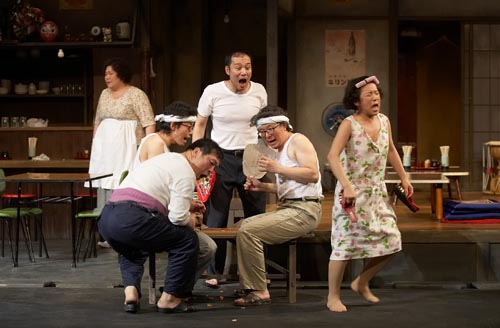 
It’s not just Korean pop icons and movie stars the Japanese are fanatical about. They have also been flocking to a play about Koreans struggling to make a life for themselves in Japan.

“Yakiniku Dragon,” a joint Korean-Japanese production that premiered in 2008, is returning to Korea on Wednesday after sell-out performances in Japan last month.

“In both countries, fans of the play have kept asking us to bring it back,” Seoul Arts Center said in a press release.

The play was first produced in celebration of the 10th anniversary of the New National Theatre in Tokyo and the 20th anniversary of Seoul Arts Center - they are the play’s two producers. It premiered in Japan in April 2008 and was presented in Korea the following month.

After its premiere, the play won awards at several prestigious awards ceremonies in Japan.

It was named Best Play of the Year at the 8th Asahi Performing Arts Awards and won the 43rd Kinokuniya Theatre Award and the 13th Tsuruya Nanboku Drama Award.

In Korea, it was selected as one of the top three plays of the year by the International Association of Theatre Critics-Korea and one of the seven best performances of 2008 by the Korean Theater Review, a monthly journal about plays in Korea.

“Yakiniku Dragon” depicts a Korean family that runs a barbecue restaurant in Osaka, Japan. The family business faces closure when the government threatens to take it away, saying that it was built on government-owned property. The main character, Yong-gil, argues that he paid for the land and fights to keep the family together while resolving the dispute with the local government.

The story of Yong-gil’s family fighting to stay together in the face of hardship resonated with Japanese audiences, who experienced the dissolution of the extended family and the rise of the nuclear family in the 1970s.

It also received critical and audience acclaim in Korea, where the history of Koreans living in Japan still touches a nerve among Koreans here.

The play is written and directed by Chong Wishing, a Japanese-Korean playwright and director.

“Japanese-Koreans are part of both Korean and Japanese communities but at the same time are part of neither,” Chong said.

“Our family had a similar experience as Yong-gil’s family and I wanted more people to sympathize with the agony of Japanese-Koreans. In a broader sense, I wanted people to understand the power of family,” Chong added.

Many members of the original cast are scheduled to perform in the encore production, including actor Shin Chul-jin, who plays Yong-gil.

The play represents the second collaboration between the Japanese and Korean production companies. Their first project was called “Across the River, in May,” which premiered in both countries in 2005.

*“Yakiniku Dragon” runs from March 9-20 at the Seoul Arts Center’s Towol Theater. Performances start at 7:30 p.m. on weekdays, at 2 and 7 p.m. on Saturdays, and at 3 p.m. on Sundays. There are no performances on Mondays.