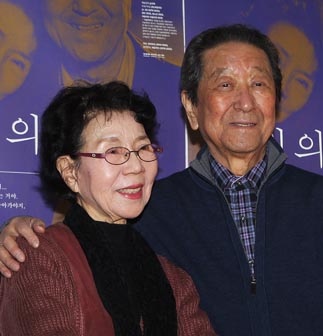 Baik-Chang Theater, the first Korean theater named after living stage actors, will host its first show since opening in December, with the premiere of “Snow in March,” which stars the two actors for whom the theater is named.

The actors, Baik Soung-hee and Chang Min-ho, play the main characters in the play written by Bae Sam-sik, which opens March 11 at the theater in Seogye-dong, central Seoul.

“Snow in March” is about a woman who dies and comes back as a ghost to keep her husband company.

The play’s director, Son Jin-chaek, was excited to work with the two veterans.

“My heart started racing just thinking about having the two actors on stage together in the theater that’s named after them,” Son, who is also National Theater Company of Korea’s artistic director, said during a press conference at the National Theater’s Studio Hana in Seogye-dong on Feb. 22. “I’m very honored to be a part of this project.”

Baik, 85, and Chang, 86, are two legends of modern theater in Korea. They have appeared in more than 300 productions together and have a close working relationship that is in some ways like a marriage.

“Day by day, as we rehearse and analyze the characters together, we become reborn as the characters on stage,” Chang said. “The process, of course, is not easy, but it is easier because we have such a good relationship.”

Although some at the press conference expressed concerns about the actors’ age being a hindrance, both performers assured the press that they were born healthy and that age was not an issue for them.

“I’m going to keep acting until I can’t,” Baik said. “I think true actors only retire when they are physically unable to continue or they have difficulty memorizing their lines.”

Chang said he has had no time to worry about anything but getting the play off the ground.

“Performing is an immediate art. Unlike film or music, there’s no ‘cut’ or ‘do over’ in theater,” Chang said. “I’m focusing only on this piece, and I’m delighted to act in a theater named after me.”

Bae, the playwright, dedicated the play to the two actors.

“The story unfolds very slowly to show that everything disappears,” Bae said. “I wanted the audience to think about where all beings come from and where they go when they die.”