For a sport dominated by hefty wrestlers who rely on strength over skill, the crafty Lee Seul-ki - who was crowned the Baekdu Champion in early February - is a breath of fresh air for ssireum officials and fans alike.

Competing in the top level of competition for five years, Lee, who weighs in at 138.9 kilograms (306 pounds), used speed and technique to defeat Lee Tae-hyun at the Lunar New Year Championship. It was an impressive feat for the 24-year-old, considering his opponent had 20 Baekdu titles to his name, was coming off three consecutive tourney wins and was selected the MVP last year.

“I waited a long time for my first Baekdu title. Words can’t describe the feeling I had upon winning,” said Lee Seul-ki. “It’s an honor to be compared to a legend like Lee Man-ki, and I know I have to work harder to live up to the expectations.” 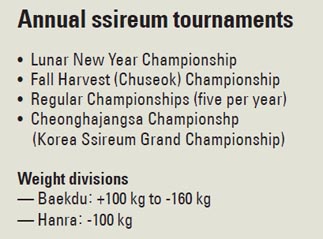 Lee is a stark contrast to the immense wrestlers who have come to dominate the Baekdu division, the sport’s top weight class, and who use their strength and girth to dominate the sandpits. Lee is a throwback to a time when strength was matched with versatility, and technique topped brute strength. Lee is what experts in the sport call a technician. With ssireum continuing to struggle to draw large crowds and television audiences, Lee might be the answer the Korea Ssireum Association has been searching for.

“There are many large wrestlers competing in the Baekdu division now. In comparison to years past, matches can come across as a bit boring for fans,” said Lee.

His title-winning performance last month could not have come at a better time. KSA officials announced in late January that they will place a 160-kilogram limit on the Baekdu weight division starting this month in an attempt to discourage slow-paced, power-based matches.

“We might not see a huge immediate impact, but wrestlers can be conditioned and trained to change their styles,” said Lee Seul-ki. The implementation of a weight limit is an attempt to attract fans back to a sport that had once been accustomed to drawing sizeable crowds and huge television viewership ratings, but has been struggling for over two decades to attract fans.

“The beauty of the sport is watching smaller wrestlers defeat much larger opponents using superb techniques,” stated a KSA official. “But the current trend of heavy wrestlers in an open-weight Baekdu division has resulted in a large number of power-based matches, which can be boring for the fans. We’re hoping the latest change can produce exciting matches and bring fans back to the stands.” 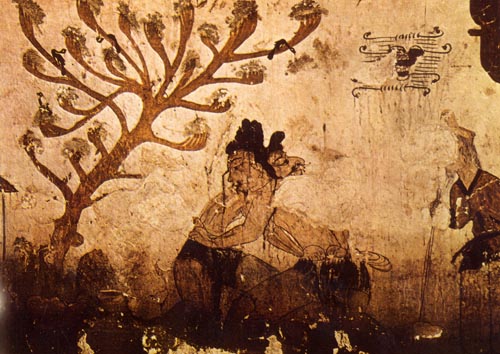 A ssireum match is depicted in a 4th-century mural of a Goguryeo Dynasty tomb located in Jilin, China.


In ssireum, two wrestlers wear tight shorts with a long piece of cloth tied around the waist and groin area - called satba - for grips. The sport requires a mix of strength, leverage and quick reflexes. Wrestlers must also have a firm grasp of an array of techniques - 100 in all and 15 hand techniques alone - which are generally categorized into foot, leg and hip techniques and feature variations of lifting, throwing, twisting, tackling and tripping.

The objective of the sport is to knock or throw the opponent to the surface of a round sandpit measuring seven meters (30 feet) in diameter. Matches are three minutes long with a one-minute break and another three minutes of overtime if a winner is not declared after regulation. On average, most matches do not last more than a minute, and they rarely reach overtime.

Ssireum is a traditional Korean sport with roots that go as far back as the Goguryeo Dynasty (BC37-668AD). It shares a resemblance to other traditional forms of grappling sports in countries like Mongolia, Japan and parts of Central Asia. Large-scale ssireum tournaments are held around the Lunar New Year and Chuseok holidays. The modern form of organized ssireum started in 1912 during Japanese colonial rule (1910-1945) and blossomed into one of the most popular sports during the 1980s when the Cheonhajangsa Championship - an open-weight tournament that crowns the top wrestler - was introduced in 1983. 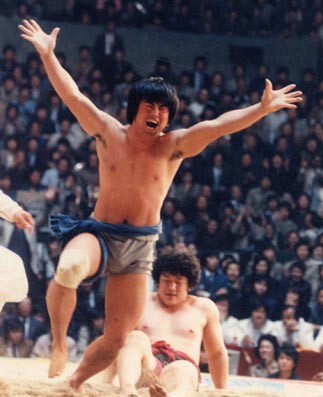 Lee Man-ki, former Cheonhajangsa champion and current professor at Inje University, was the sport’s star during its heyday in the 1980s.

With the first ever Cheonhajangsa Championship taking place on April 14, 1983, a then-unknown Kyungnam University sophomore by the name of Lee Man-ki, with his good looks, muscular frame and solid techniques, rose to stardom.

Lee won the inaugural title - measuring 182-centimers (5 feet 10 inches) tall and weighing no more than 110 kilograms - and went on to defeat much bigger rivals Lee Jun-heui and Lee Bong-gul in the coming years. Lee won 10 Cheonhajangsa titles, 19 Baekdu titles, 7 Hanra titles as well as 11 other tournament wins in his seven years. He amassed a career record of 150-50. Lee’s record of 10 Cheonhajangsa titles still stands to this day.

“During the heyday of ssireum in the 1980s, fans flocked to major tournaments in Seoul and Busan. Many of them were turned away because tickets were often sold out and the going-rate for tickets from scalpers at the time was between 100,000 won [$89] and 200,000 won,” said Lee Man-ki, the former Cheonhajangsa champion who is now a professor of sports physiology at Inje University.

In the late-1980s, the sport saw an increased number of bigger wrestlers rising to the top of the sport. Matches began to turn into stalemates between massive men. Not surprisingly, the number of fans who flocked to arenas began to dwindle.

“In the years following Kang Ho-dong’s rise to the top [a former Cheonhajangsa champion], we started seeing a lot more bigger wrestlers, and as matches became power-based and slow-paced, fans slowly started drifting toward other sports,” said Lee Man-ki. “Nowadays, wrestlers boast more power, but are not as well-conditioned as those from years past.” 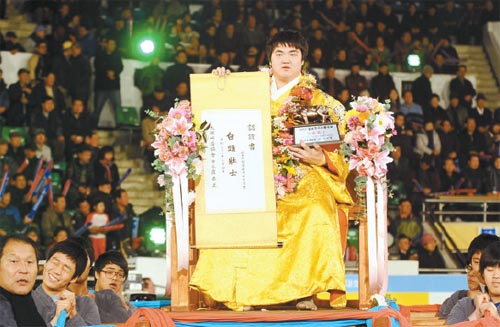 
The drop in attendance figures coincides with the implementation of a grip rule change, which was introduced by the KSA in 1986. The KSA rule made wrestlers hold a tighter grip.

The rule change was significant in that looser grips allowed wrestlers more room to attempt various techniques as opposed to the tighter grips, which force competitors to have closer body-to-body contact. It left little room for them to maneuver and attempt big throws. The new rule made it difficult for smaller wrestlers to defeat bigger opponents on sound techniques and shifted the style of the sport into a power-based game.

The weight limit is not the first time the KSA has experimented with its weight divisions. Starting in 2002, the KSA put a 130-kilogram weight limit on the Baekdu division for two years.

“The weight change in 2002 was implemented too quickly and many of the wrestlers could not cope with the sudden change,” explained Kong Seong-bae, the head coach of Yong In University’s ssireum squad. “But this time, wrestlers were notified well ahead of time and had plenty of time to adjust to the new weight limit change ... so I think we’ll see better results this time around.”

“Ssireum is an ancient and traditional sport that has been around for thousands of years. Fast-paced and exciting sports like basketball can implement rule changes like the 30-second shot clock to speed up the pace of its games, but it can be tricky for ssireum officials to keep up with demands of the fans. The KSA has been hard at work and changed the satba rule and implemented a penalty point system to encourage aggressive, attack-minded ssireum over the past two years,” added Kong.

The weight limit has been an ongoing debate since the late-1980s, and while the latest changes are a good start in promoting more action-packed matches, Lee thinks there is a need for the government to provide better support for a sport that has its roots deeply entrenched in Korean history and culture.

“With some of the young, skilled wrestlers coming up, the future of ssireum looks bright,” said Lee Man-ki. “It was always well-liked by the public, and despite its struggles over the past few decades, things will get better.”

Said Lee: “We also need to remember that the sport of ssireum has a long history and has always been a part of our culture. The KSA needs to continue to work to improve its product for the fans, but the government needs to give our traditional culture and sport of ssireum its full support.”