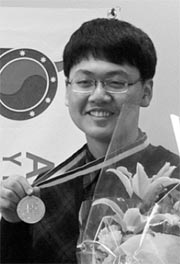 Ryoo Sang-woo is awarded a medallion for math excellence.

A Korean high school student with a flair for mathematics has received the highest honor in the world’s largest math competition.

On Feb. 14 at the Australian Embassy in Seoul, a medallion was awarded to Ryoo Sang-woo for excelling in the 33rd Australian Mathematics Competition, becoming the second Korean to win the award.

Now a second-year at Chungbuk Science High School, he was one of the top 60 students to receive the medal out of 500,000 students in over 40 countries who participated in the competition.

“He is one of the youngest people to take the high school competition, so that’s an extra credit to him and to his parents,” he said at the ceremony.

Ryoo participated in the senior level competition last year, which is usually for second- and third-year students. The math whiz has always been fascinated by numbers. “When I go out for a ride in the car, I look at the license plate number and figure out whether it is a prime number or not,” Ryoo said.

Ryoo credits his strong motivation to learn for his success, plus a bit of luck. “In my free time, I like to look up new math problems on the Web or go to the school library to check out the math Olympiad books.”

Ryoo’s parents said his interest and talent in mathematics is natural. “From a young age, my youngest son has always concentrated on mathematics,” his mother Yoon Nam-soon said. “I have only encouraged him to read and study.”