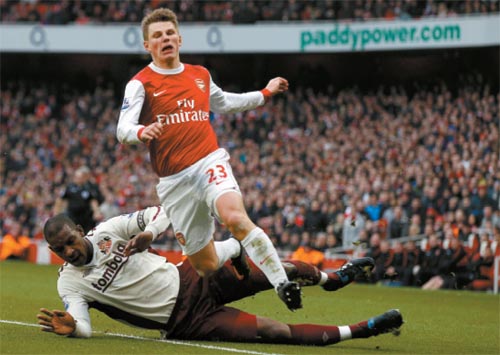 
LONDON - Arsenal wasted numerous chances as the English Premier League title-chasers were held to a frustrating scoreless tie by Sunderland on Saturday, stalling its pursuit of leader Manchester United.

Sunderland goalkeeper Simon Mignolet produced a string of superb saves to deny Arsenal, which came closest to scoring when substitute Marouane Chamakh hit the bar with a second-half header at Emirates Stadium. The Gunners narrowed the gap to United to three points, with both sides having played the same amount of games. United visits Liverpool on Sunday.

“We are very disappointed because we gave a lot today. We tried everything but Sunderland defended very well,’’ Arsenal manager Arsene Wenger said.

Wenger was particularly unhappy that Russian winger Andrey Arshavin had a second-half goal disallowed for being offside, saying he was “disgusted’’ at the referees’ decision.

The French coach put out his strongest possible team, despite playing in the second leg of the Champions League last-16 against Barcelona on Tuesday. But the Gunners were still without captain Cesc Fabregas, top-scorer Robin van Persie and winger Theo Walcott.

It didn’t stop them from creating plenty of opportunities in the first half, with Samir Nasri denied twice by Mignolet, who also showed some outstanding reflexes to tip over a shot by Nicklas Bendtner.

Stephane Sessegnon had the visitor’s best chance before the break, the Benin midfielder skipped around Gael Clichy before his fierce drive was palmed away by Arsenal goalkeeper Wojciech Szczesny.

Arsenal maintained the pressure in the second half and Mignolet had to be alert to beat away a first-time effort from Andrey Arshavin following good work by substitute Chamakh.

The Belgian keeper then kept out a curling free kick from Nasri before Chamakh shook the crossbar with a header from six yards in the 74th minute. It was one-way traffic and Arshavin sped clear from marker Titus Bramble in the 80th, only to shoot wide from the angle.

Arsenal nearly came away with nothing, however, as Danny Welbeck’s volley crept into the bottom corner before Szczesny dived to tip the ball around the post.

“Today’s result comes at a bad moment,” Wenger said. “Will it psychologically have such a big impact on the championship? I don’t think so,’’ Wenger said.