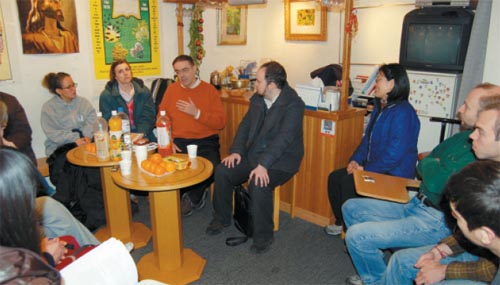 Members of the Catacombs group gather last Tuesday in Yongsan, central Seoul, to discuss how to help North Koreans living in China. By Moon Gwang-lip


An 11-year-old North Korean boy living alone a half-demolished home in China was found nearly dead from food poisoning after eating food found in the garbage. His refugee mother was arrested by Chinese authorities and returned to North Korea, and his Chinese father has no contact with him.

So, watching the boy improve after months in a foster home in northeastern China brings great pleasure to humanitarian aid worker Tim Pieters.

“He was surprisingly spontaneous, even smiled at us,” said Pieters, a Christian activist and reverend based in Seoul, speaking of his recent visit to the foster home. “It’s natural. Nobody teaches him to smile.”

The boy, whose name was kept anonymous due to security reasons, is one of tens of thousands of North Korean children that human rights activists say are abandoned in China, a population Pieters counts as among the most vulnerable and disregarded in the world.

And foster homes clandestinely managed by humanitarian activists to dodge Chinese authorities are slowly gaining a foothold as safehouses for these children.

According to human rights groups, as many as 70 percent to 80 percent of North Korean female refugees in China are sold as sex slaves or forced to married Chinese men. They are paid $500 to $1,000 for such an arrangement, but they don’t do it just for money; they need Chinese men to protect them from being sent back to North Korea.

Most children born of North Korean women and Chinese men are denied access to many aspects of Chinese society, including legal residency in China, education and national health care, because their mothers are not legal residents and their fathers usually don’t take on parental responsibility.

Once their mothers are arrested and sent back to North Korea, the children’s lives worsen. About 25,000 North Korean children live such a life in China, Pieters said.

“The North Koreans in China are especially vulnerable,” he said.

Some South Korea-based nonprofit organizations have managed foster homes in China for years.

Foster moms and living expenses are provided to the children by the groups.

Pieters, who runs an informational meeting group called Catacombs, is taking care of about 120 North Korean children, Pieters said, with hundreds, maybe thousands, of others under the care of other organizations.

The helpers are a loose alliance of different civic groups and individuals who are like-minded and share similar goals, values and compassion and sympathy for vulnerable North Koreans in China, Pieters said.

Dan Bielefeld, an international campaign director at Justice for North Korea, said help for such North Korean children is more urgent because of an influx of North Koreans into China.

Only recently did the number of North Korean defectors resettling in South Korea since the end of the Korean War in 1953 surpass 20,000, but reports indicate that 15 times more North Koreans are in China and more than 60 percent of them are women.

Still, many South Koreans are not interested in the issue, Bielefeld said.

Pieters said many South Korean churches, which he said could be the last bastion for North Koreans in need, are not that different.

“My thought was ‘what’s wrong with this picture?’ You’ve got the world’s second-most missionary-sending national churches, and you have a terribly desperate situation,” he said. “I would always argue you can’t go inside North Korea, but you can go to China to interact with refugees.

“I fully understand this is a politically, socially and militarily complex matter even for the church, but after all is said and done, it’s rare for pastors to go to China for such missions.”

Pieters said the South Korean government should also be more involved in the issue and has to confront the Chinese government to stop sending North Korean women back.

“It is outrageous not telling China, that is a violation of every conceivable human right, allowing China to do so,” he said.

The foster home is a relatively new project, but it is an extension of a bigger, older project by some civic groups to bring North Koreans into safety, called the “underground railroad,” which comes from the same term used to describe a secret passage used during the U.S. Civil War to move black slaves from the Confederate South to the Union North.

The term is now being used by Pieters and other activists to describe the secret passage they use to take North Korean refugees, both young and old, to safety.

One North Korean man doing forestry-related work was taken to safety and is ready to leave for another country, Pieters said, prompting applause from a dozen people at the meeting.

“Nine people recently came through in the last 12 to 14 days, including three from labor camps,” Pieters told those in attendance.

“We don’t usually have 10 people rescued in one month, but this month we have. It’s a very miraculous thing. I am happy to report that,” Pieters added.

The rescue missions involve much danger both for the rescued and rescuers.

If caught and sent back to North Korea, the refugees are known to be incarcerated in political prisons, including the infamous Yodok concentration camp in South Hamgyong.

Laboring for 12-15 hours on 200 grams of corn porridge, salt and water each day is routine, but hunger and forced labor is nothing compared to the interrogations, violence, sexual harassment and rape the prisoners are subjected to, according to North Korean defectors.

The rescuers are also put in danger if caught.

In 2009, he helped nine North Korean refugees enter the Danish Embassy in Vietnam as a step to get into South Korea.

Vietnamese authorities, however, arrested him at the airport and detained him for two weeks before releasing him ahead of South Korean President Lee Myung-bak’s visit to to the Southeast Asian country.

“A two-week detention in Vietnam would be as harrowing as two years in prison here,” Chung said.

North Koreans who have come to South Korea through the underground railroad are “significant” in number, Pieters said.

Indeed, Pieters graced the cover of Time magazine several years ago for his underground railroad project.

And major global media groups, including The New York Times and BBC, also did stories on him, with some suggesting him as a possible candidate for the Nobel Peace Prize.

But few North Koreans actually meet with him once they come to South Korea. Pieters said it was “huge disappointment” at first, but he later changed his mind.

“They don’t want start a life in South Korea feeling so obligated to somebody,” he said.

“I have to resign myself that maybe my part of work is there, and churches or specific organizations are better equipped to take care of them here.”

His underground railroad project was started in the mid-1990s, first by himself but later helped by people who he inspired through Catacombs meetings.

The meetings, held every Tuesday since 1996, has drawn about, 1,000 participants so far, he said.

“I come to this meeting not just because I want to be informed, but I want to be involved,” said a teacher at a Seoul-based U.S. school, who only identified herself by her first name, April, after last Tuesday’s meeting.

“Coming here, finding out different ways that I can be doing, talking with other people, hearing their stories; I find them inspiring,” April added.

Pieters said people come and go but the meetings will continue as long as North Koreans remain suffering.

“A humanitarian disaster of this magnitude should cause people to feel, ‘how we are going to fix this?’ And I, [through] this Catacombs meeting, let them know that the program is underway. This isn’t just theory.”