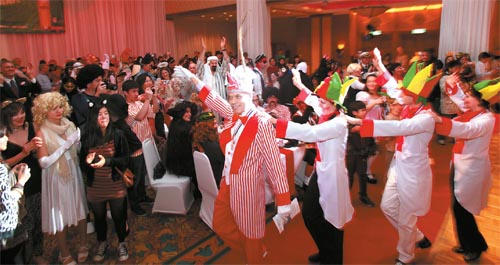 The German community in Korea celebrated its first German carnival at the Millennium Hilton Seoul on Friday. Colin Durkop, in the red-striped jacket, the president of the festival committee in Korea, leads a parade of 11 carnival commissioners. By Jeon Min-gyu


Claps, folk songs and a masquerade filled a party hall at the Millennium Seoul Hilton in central Seoul on Friday in celebration of the first German carnival in Korea.

In Germany, hundreds of thousands of people in masks usually celebrate from 11:11 a.m. on Nov. 11 until 48 days before Easter to mark Germany’s victory in the Thirty Years’ War in 1830.

The event in Seoul, called the Carnival on the Rhine and Han Rivers, was modeled after the event in Germany and featured similar costumes and rituals.

Costumes were standard attire for most of the roughly 200 participants, most of whom were Germans living in Korea. The room was filled with witches, wizards, robots and even a clown.

Among the costumed crowd were the 11 commissioners who organized the festival, all of whom are high-profile German officials here, including Hans-Ulrich Seidt, the German ambassador to Korea.

Wearing colorful German traditional hats, the 11 commissioners paraded from the gates of the hall to the stage as joyful music and cheering spectators surrounded them, some shouting “Helau,” or “Alaaf,” typical carnival greetings.

“I think this festival is very meaningful because we are bringing German culture to Korea,” said Julius Dreyer, 17, a student who attends Deutsche Schule Seoul International, a German international school in Seoul.

After the parade, a prince and a princess were crowed, following the German tradition.

Two people were recognized for building ties between Germany and Korea and were selected as prince and princess.

Sven Lee, 39, a Korean-German eye doctor whose father was Lee Su-gil, the first Korean doctor to study in Germany in the 1950s, was chosen as the first prince at the festival.

“When my father was studying in Germany, he led the local carnival community,” Lee said. “When I met with the wife of the German ambassador in Seoul, we talked about the idea of holding a carnival in Korea and now it’s come true.”

The princess of the evening was Patricia Tiedemann, whose husband is the president of Carl Zeiss Korea, a German maker of optical instruments.

After the royal couple appeared, Lee Charm, a German-Korean who is the first foreigner to serve as CEO of the Korea Tourism Organization, served as the host for the remainder of the evening.

Durkop said that the festival committee will hold another carnival in Seoul in November.

“Through this event, we want to build a cultural bridge between Germany and Korea,” Durkop said.