The artist who made upside down right

The artist who made upside down right 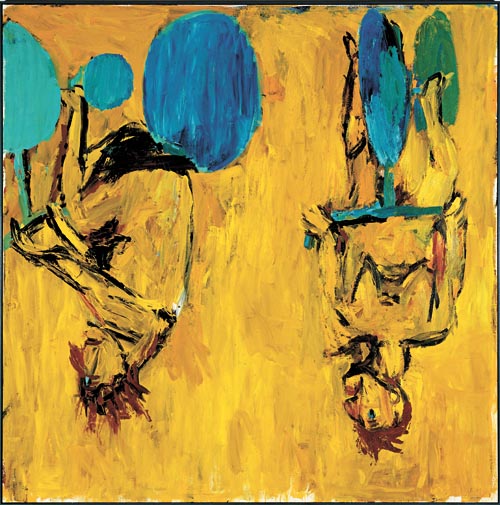 
MUNICH - In the world of Georg Baselitz, up is down and sideways is just another direction. But none of these directions limits his freedom of expression as an artist, which is perhaps not surprising for an artist known for painting his subjects upside down.

As an artist, Baselitz is recognized as a member of an elite group of Neo-Expressionist painters from Germany. At first glance, his upside down works may look rather clumsy and even disconcerting.

But he paints this way to draw the viewer in, inviting them to think.

Last September, I had a chance to visit the artist in his studio near Munich. We spent an afternoon together talking about history, politics and his upcoming exhibition.

Baselitz was born in 1938 in Deutschbaselitz, which would later become East Germany, just before the start of World War II, when European intellectuals were migrating to New York City to seek refuge from the Nazis and the Fascists.

Later, as Europeans rebuilt their war-torn motherland and endured the spread of communism, New York City was crowned the “Athens of the twentieth century.”

Tradition versus innovation, communism versus democracy, horrendous vestiges of war versus the rise of capitalism. That is how Europe and the United States differed after the war. 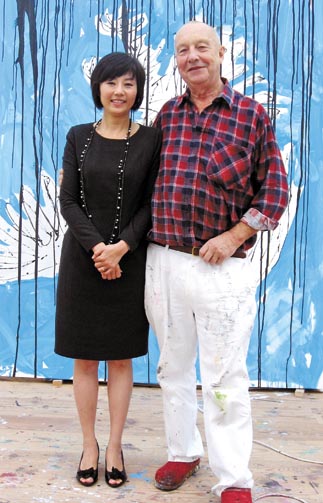 The contributing writer, Representative Cho Yoon-sun, left, poses with the artist in his studio near Munich. Provided by Cho Yoon-sun

The postwar era in which Baselitz grew up gave rise to Pop Art, which was associated with a reverence for capitalism and developed its own modes of contemporaneity through performances and art events known as happenings.

It was a unique, unprecedented milestone in the history of the arts that was far removed from the pure form of painting in which Baselitz had immersed himself since he began studying the fine arts in 1956.

But Europe was unable to escape the influence of Pop Art, and Germany was no exception.

In the midst of the Pop Art tsunami, it was Baselitz who helped European artists to reacquire painting, the quintessence of fine arts. It was also Baselitz who shifted the barycenter of fine arts back to Europe.

Through his upside-down art, which he introduced in 1970, he has endeavored to defend painting from the Pop Art overflow. Drawing objects upside down gave him the freedom to focus on painting.

History regards Germany as the mecca of Neo-Expressionism from the late 1970s. And for 20 years, Baselitz fiercely defended painting against the typhoon that was Pop Art. The tree that survived the typhoon, Baselitz’s form of pure painting has blossomed and has become his legacy. This is the reason why Baselitz’s name cannot be left out of any art history book.

When I stepped into Baselitz’s front yard, the first words that came to mind were “humbleness” and “naturalness.” 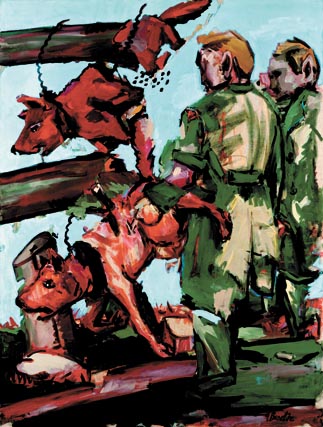 His studio, which was built by Herzog & de Meuron, the firm that designed the Beijing Olympic Stadium and the Tate Modern, looked at first more like a warehouse or cattle shed with a flimsy roof. I later learned, however, that it was designed to maintain a constant level of light intensity throughout the day.

On the inside, the studio was full of enormous canvases, some 2.5 meters (8.2 feet) by 2 meters in size, that were stacked on each wall. The works were waiting for their unveiling at an upcoming exhibition that will take place this May at the White Cube Gallery in London and had not yet been shown to the public.

I explored the studio as if I were on a treasure hunt. Brushes and paint tins were arranged as if they were newly installed artworks. The floor, which was stained with paint, looked like a Jackson Pollock masterpiece. Initially, I wandered around his studio as if I were seeking evidence of God. After a while, however, I strolled through the many masterpieces with a camera like a curious girl in her grandfather’s study. But it was a series of eagle paintings, which filled up one wall, that intrigued me the most.

As I examined them, I told Baselitz that his eagle paintings were some of my favorites. But these looked new, so I asked why he started painting them again.

“I have been painting for a little more than 50 years, but it doesn’t feel like a long time to me,” Baselitz said. “By painting subjects that I have painted in the past, I wanted to express that time is meaningless and that the time I’m spending now is no different from the time I spent decades ago.”

As he compared his previous works and the pieces that he was working on at the moment, he tried to demonstrate that his series of paintings of men and another he did on dogs were subjects that he enjoyed painting in the past. We could not, however, see the previous works, because they had been sold to museums or individual collectors and Baselitz had to refer to the catalogs to talk about his works.

Many of the new eagle paintings had black lines of paint dripping down the canvas, creating lengthy traces on the surface. This was different from the works he had done in the past, and I asked him what it meant.

“As I’ve aged, I’ve become more and more convinced that mankind must be free,” Baselitz said. “A man’s desire should be neither hidden nor suppressed. I dripped the black paint line to symbolize that everything must flow naturally.”

He led me to a paint tin with two holes on each side of the lid and pretended to thrust the tin onto the canvas to show me how he had done it.

At some point during our tour, Baselitz asked about politics out of the blue.

“So, you are a member of the National Assembly. Are you right or left?” he asked.

“Slightly right, center leaning,” I said, and asked him the same question.

Baselitz, who was born in East Germany and moved to West Germany before he turned 20, replied emphatically with a laugh, “Extremely right! I couldn’t bear communism at all.”

I was also curious to know how he had changed as an artist over the course of his 50-year career.

“When I was young, it took quite a while for me to finish one work,” he said. “I prudently selected which colors to use, and I painted cautiously. I re-examined and redrew my works. But not anymore. Now it is more like an instant expression at the very moment. I do not hesitate anymore.”

Sure enough, his paintings from the past were opaque, filled with gravity and full of color. His works had gradually become much lighter, more transparent, more uninvolved and light-hearted.

“Before I start to paint, I create a vivid image in my mind,” he said. “It doesn’t take long to transfer what I have in my mind onto the canvas.”

Later, Baselitz asked his son, who was nearby, to take a picture of us. He took his glasses off before the photograph was taken and constantly inspected each picture after it was taken.

His wife Elke did same when the three of us took pictures at his home before Baselitz offered to give me a tour of the house.

While the studio was Baselitz’s domain, Elke seemed to be in complete control of their house. She was an elegant and unpretentious beauty.

We went through a glass door to the dining hall and into a kitchen filled with dazzling sunshine. It was immaculate, as if it had never been used.

Next, Baselitz showed me to his study, which he said he was very fond of. A hexagonal bookshelf went all the way up the wall to the ceiling on the second floor. The chandelier hanging from the ceiling looked like a dandelion seed, with an array of light bulbs attached to it.

The study was filled with catalogs and books on art. I even found a Faiyum mummy portrait, which was used to cover mummies’ faces and were the first portable paintings in world history.

When I came across a daffodil painting covering one wall, I gave a shout of joy. My nom de plume, which I acquired when I published my book, was Nan Jeong (Daffodil Pond). I couldn’t express enough how delighted I was when I encountered the daffodil painting in Baselitz’s home.

Before I left, Baselitz gave me a catalog that he signed himself.

I asked if he would return to Seoul for another exhibition and expressed my hope that he would.

“I am not sure . . . I was not allowed to take the plane last time,” he mumbled, referring to problems with his health that have prevented him from traveling in the past.

As my car backed out of the drive, he stood and gazed at me, even after his wife and son had gone back into the house. Every time our eyes met, he waved at me. He stood there like that until the car was out of sight.

*Cho Yoon-sun is a lawmaker with the Grand National Party and the author of a book about art and opera called “Opera Goes to the Museum” (2007).