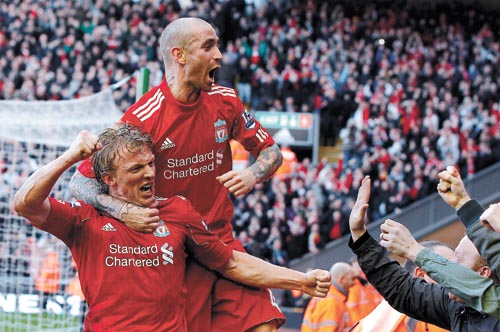 
LIVERPOOL, England - Dirk Kuyt scored a hat trick as Manchester United’s title challenge was dealt a major setback after a 3-1 loss to Liverpool at Anfield on Sunday.

Kuyt put Liverpool in control late in the first half with goals in the 34th and 39th minutes before scoring his third in the 65th. The first and last goals were largely due to the outstanding play of Luis Suarez.

Substitute Javier Hernandez scored a consolation goal for the visitors in stoppage time.

With nine games remaining, Manchester United tops the standings with 60 points, but Arsenal, which has a game in hand, is second with 57.

“Dirk got three goals, he’ll get the headlines,’’ Liverpool manager Kenny Dalglish said. “Luis Suarez played fantastically well, but the rest of them weren’t too far behind as well.

“We know it’s a good victory for us. We know Manchester United are a great benchmark but our season is not finished. We want to keep going.’’

Andy Carroll, who Liverpool signed from Newcastle in January for a record 35 million pounds ($56 million), made his debut when he came on as a 74th-minute substitute.

United has now lost back-to-back league games for the first time in two years, after its midweek loss to Chelsea.

United is tied with Liverpool for most English league titles at 18, and Liverpool would relish helping deny its bitter rival a record 19th success.

The visitors were not aided by the absence of their main central defensive partnership of Rio Ferdinand and Nemanja Vidic.

Ferdinand is injured and Vidic suspended.

Stand-in Wes Brown was given a torrid time alongside the inexperienced Chris Smalling as Liverpool showed attacking intent from start to finish.

An injury to Fabio Aurelio forced the hosts into a defensive reshuffle, causing Sotirios Kyrgiakos to make a sooner-than-expected introduction. But the forced change did not hamper Liverpool, which took command in an eventful end to the first half.

Kuyt’s first goal came thanks to the sublime skills of Uruguayan forward Suarez, who twisted and weaved his way past four players and a string of challenges in the penalty area before squaring for the Dutch international to score his fifth Premier League goal of the campaign.

His sixth quickly followed five minutes later when Nani’s misdirected header fell perfectly for Kuyt to double his side’s lead. But both sides were fortunate to finish the half with 11 men.

Liverpool defender Jamie Carragher escaped with a warning for an ugly challenge on Nani in the 39th minute, which resulted in the United player being carried off on a stretcher.

United right back Rafael was lucky to stay on after a lunging attempted tackle on Lucas Leiva in the 44th minute. Dimitar Berbatov was again unfortunate when his 58th-minute header was chested off the line by Raul Meireles, before Kuyt completed his hat trick seven minutes later.

Suarez was again involved, his curling free kick was beaten away by goalkeeper Edwin Van der Sar into Kuyt’s path.

And there was still time for Carroll to come off the bench and make his long-awaited debut in the 74th minute.

ESPN.com’s James Martin wrote of Kuyt: “Can there really be any doubt about Kuyt’s skill? In fairness, he didn’t have to do much on the first goal. Or the second. But the third was classic Kuyt.”

And although Hernandez reduced the deficit with a glancing header following a cross by Ryan Giggs in stoppage time, Liverpool’s victory was thoroughly deserved.