Our duty to protect the songs of children

Our duty to protect the songs of children 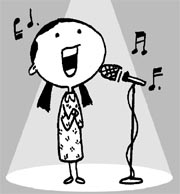 Mencius believed in the innate goodness of children. He believed that everyone is born a good person, and therefore, if a person can keep the mind of a child even after becoming an adult, the world will find peace.

Meanwhile, Jean-Jacques Rousseau, famous for his “Social Contract,” was a Western advocate of innate goodness. He also believed that we need to be careful not to let the good, innocent mind of a child become polluted by adults.

Bang Jeong-hwan, the educator and cultural advocate who founded Children’s Day in Korea, and Yun Seok-jung, the children’s book writer and poet, were notable Koreans who loved children.

Yun, in particular, thought that writing nursery rhymes was a good way to enlighten children. Starting with his 1924 book “Nursery Rhymes by Yun Seok-jung,” his first collection of children’s songs, he devoted his whole life to writing children’s poetry, producing lyrics to more than 800 songs such as “Plop, Plop” and “Half Moon in the Daylight.”

There are two kinds of children’s songs in Korea. Traditional folk songs, such as “Bird, Bird, Blue Bird” and “Toad,” are transmitted from generation to generation, while children’s songs written since the Japanese colonial period follow the Western musical style.

But the tradition of children’s songs is struggling to survive today. MBC recently decided to discontinue the Children’s Creative Song Festival, which has produced many great children’s songs for 28 years since 1983. The festival is so prestigious that 14 songs from the festival have been included in many textbooks.

MBC’s Web site bulletin board is filled with appeals to keep the festival going. After all, many young kids are training to dance and sing to emulate their favorite K-pop groups.

And even when commercialism prevails, it is the duty of the grown-ups to protect the innocent minds of children and support their dreams.