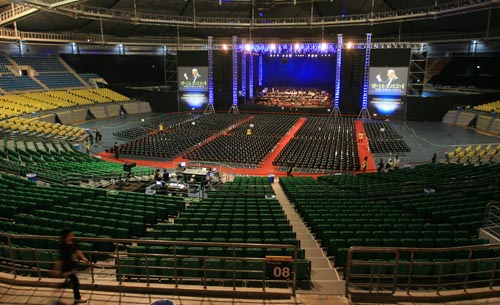 Olympic Gymnastics Arena in Olympic Park, southeastern Seoul, is the only major concert venue for big-name touring acts in the capital. [JoongAng Ilbo]


A stunning list of high-profile pop musicians has been streaming into Korea for concerts over the past year, and the trend seems likely to continue for a while. Eric Clapton, Sting, Taylor Swift, Stevie Wonder and Whitney Houston are just a few of the artists who have played in Korea in recent months. Santana is playing in Seoul today, followed by Iron Maiden tomorrow and the Eagles next Tuesday.

These globe-trotting musicians have one thing in common: They all perform at Olympic Gymnastics Arena, a large arena in southeast Seoul that also houses smaller performance halls.

Big-name artists have no other choice when it comes to venue because Olympic Gymnastics Arena is the one and only indoor concert hall in the country that can hold more than 10,000 people. Officially, it has a seating capacity of 15,000. But installation of stage and sound equipment reduces the capacity to 12,000 at concerts with standing room and 11,000 at concerts with stadium and overflow seating.

Olympic Gymnastics Arena “may not be the best venue, but it is the best option for concert organizers, given the reality,” said Kevin Cha, a PR representative at Hyundai Card, which has hosted concerts with such superstars as Sting, Stevie Wonder and Whitney Houston as part of its signature Super Concert series.

Aside from Olympic Gymnastics Arena, the next largest concert facility in Seoul is Jamsil Gymnasium in Songpa District, which can hold up to 8,000 people. But concert organizers confess that they tend not to prefer the gymnasium because of its poor acoustics and large distance between the stage and the second floor seats.

In Japan, Tokyo has two major concert venues: the Tokyo Dome, which can hold as many as 55,000 people, and Budokan Arena, widely referred to as the Martial Arts Hall in English, which can seat 14,201. Osaka, Japan’s third-largest city, has Osaka-jo Hall, or Osaka Castle Hall, which has a capacity of 16,000. In China, Beijing has Wukesong Culture & Sports Center, and Shanghai has Shanghai Mercedes Benz Arena - each has a seating capacity of 18,000.

Donna Kim, a PR manager with concert agency Dunice, said the problem in Korea is not just one of size.

“Major artists from overseas perform either at Olympic Gymnastics Arena or AX-Korea these days. The sound equipment is much better at AX-Korea since it was originally built for concerts, but the problem is it can only accommodate 2,000 people,” Kim said. “Sejong Center for the Performing Arts and LG Arts Center, which have bigger halls but do not have standing room space, are not really appropriate for pop artists who attract relatively louder audiences.”

To invite hot artists who demand hefty guarantee fees of up to 1 billion won ($894,645), concert promoters need a large venue. A small performance hall translates to higher ticket prices for concertgoers because the same artist guarantee has to be paid with the income from a smaller number of ticket sales, putting the promoter at risk of lower ticket sales overall, Kim said.

Built in 1986, two years ahead of the 1988 Seoul Olympics, Olympic Gymnastics Arena has yet to go under major remodeling. It had its roof replaced in 2003 after it was destroyed by heavy snow in the winter of 2001. But little else has been done. Old facilities aside, promoters and audiences also complain about the sound.

“The sound quality at Olympic Gymnastics Arena isn’t satisfactory. But what can we do about it when we know it was originally built for sporting events?” said Jane Kang, 34, an office worker and frequent concertgoer.

And it’s not just the locals who feel that Korea’s concert facilities could use an upgrade. A manager with a New York-based entertainment agency who recently visited Seoul for a concert deal with a local promoter said, “As an observer of Korea’s concert scene for the past decade, I think the country definitely needs more concert halls that are bigger and provide quality sound equipment.”

The country’s music industry has long demanded for a renovation of Olympic Gymnastics Arena or construction of a new concert hall comparable in size.

But neither option is simple, according to an official with KSPO&Co., a public company under the Ministry of Culture, Sports and Tourism, which oversees facilities at Olympic Park.

“It cost 16.9 billion won to build Olympic Gymnastics Arena back in 1986,” the official said. “A recent study we did showed that remodeling the entire venue will cost an estimated 40 billion won. That’s enormous. We constantly do minor renovations such as seating. But we cannot say for sure when we will embark on a [larger] remodeling project.”

When asked whether the ministry had any plans for remodeling Olympic Gymnastics Arena, an official from the ministry’s Video Content Industry Department said, “Not really.”

“There have been a lot of talks on that matter, but our dominant position is that the cost is just way too high. And you know the country is undergoing financial hardship now,” she said.

Instead of refurbishing Olympic Gymnastics Arena, KSPO&Co. chose to renovate Olympic Hall last year at a cost of 7 billion won. A press release from the ministry last July said that the renovation was undertaken “in light of the global impact of the Korean Wave and to lift the status of pop artists.”

When complete in June, Olympic Hall will consist of two venues, with a 240-seat venue devoted to pop music right next to the existing 2,400-seat main hall.

KB Haneul Theater before, left, and after a major renovation project in April 2008. To raise the funds for the project, the National Theater of Korea formed a partnership with KB Financial Group under which the corporation received the naming rights to the venue.

Given the high cost of building a new, large-scale concert hall, some concert-savvy local enterprises are striking out on their own. A handful of companies have decided to build their own mid- or small-size performance halls. Others have joined hands with existing state-run performance halls and promised to donate billions of won for renovation projects.

Interpark, a major Internet shopping site that sells concert tickets, is spending more than 10 billion won to build a 1,600-seat musical hall and a 1,268-seat concert hall in Hannam-dong, central Seoul, which will be completed later this year. Nearby, Hyundai Card is building a small hall for exhibitions and recitals. The complex is set to open late next year.

Meanwhile, some corporations are providing funds for remodeling projects in exchange for having their names attached to the refurbished facilities. Olympic Fencing Gymnasium will become SK Handball Gymnasium by August next year with funds from SK Group. Olympic Weightlifting Stadium reopened as Woori Finance Art Hall in November 2009, while Haneul Theater at the National Theater of Korea became KB Haneul Youth Theater in April 2008. The two were sponsored by Woori Financial Group and KB Financial Group - two of Korea’s largest financial entities.

This trend has spilled over to venues for classical music concerts. A 632-seat concert hall solely devoted to chamber music is set to open at the Seoul Arts Center in the latter half of the year.

It will be called IBK Chamber Hall for the next 20 years, under an agreement in which the Industrial Bank of Korea provided 4.5 billion won, more than half of the 8 billion won remodeling cost. The deal, sealed last year, also allows IBK to host a concert each month at the hall.

“We needed a performance hall that is in between the Concert Hall, which has 2,600 seats, and the Recital Hall, which has 380 seats, because we had constant demand for chamber concerts. It would have been good if we had received government support, but it is almost impossible, realistically,” said a PR manager at the Seoul Arts Center. “The government has made it an unofficial policy not to fund new facilities ever since the Asian financial crisis of the late 1990s. As state-run art institutions, we have no choice but to launch for-profit businesses or obtain corporate sponsorship for new venues.”

In June last year, the 19-year-old cultural center forged another deal with CJ. Towol Theater, which specializes in musicals and theatrical dramas, will reopen late next year as the CJ Theater with nearly double the number of seats - from 670 to 1,000. The contract period will also be 20 years.

For corporations, investments such as these can maximize their exposure at a relatively small expense, industry insiders say. At the same time, they can refresh their image as culture-friendly corporations.

“Branding is sort of a trade-off between publicity and financing,” Yong Ho-sung, a manager with the Art Policy Department at the Culture Ministry, wrote in a recent contribution to a local publication. “This strategy, as a financial resource, is expected to spread further across the Korean arts world, based on successful cases in the United States and other countries.”

In the U.S., however, this kind of arrangement is often undertaken by individuals than just corporations.

In July 2008, the New York State Theater at the Lincoln Center reopened as the David H. Koch Theater, named after the oil-and-gas billionaire. He is known to have donated $100 million to the institution, the largest personal donation in the cultural center’s history.

“Perhaps there is a difference in donation culture between Korea and the United States,” said the Seoul Arts Center official. “Donations to cultural establishments are still mostly given by enterprises. But we hope individuals will gradually jump in.” 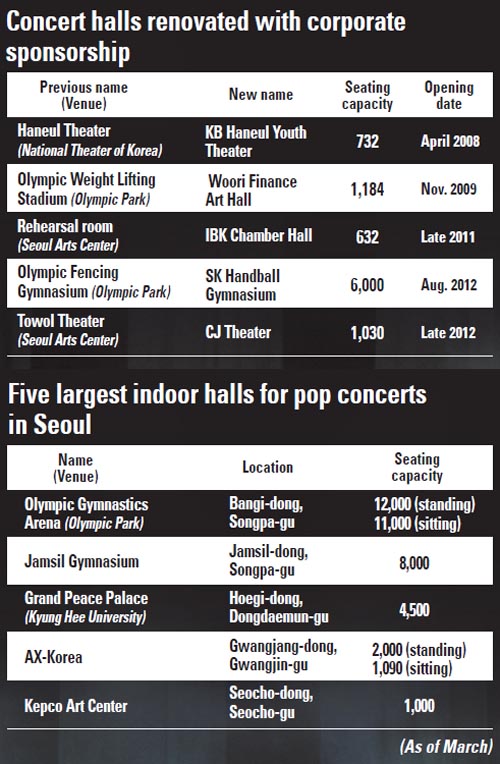