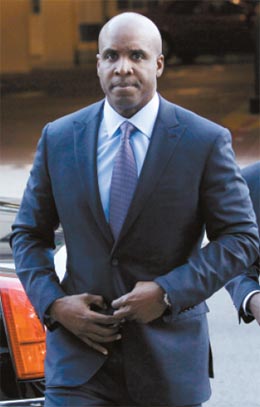 Bonds pleaded not guilty last week to one charge of obstructing justice and four counts of perjury for denying to a grand jury in 2003 that he knowingly took performance-enhancing drugs. His trial is scheduled to begin March 21.

Anderson, among those convicted in the BALCO steroid scandal, has already gone to jail for refusing to testify to a grand jury looking into Bonds, and said last week he would not testify in the upcoming trial.

Illston warned him that could mean a return to jail for being in contempt of court.

That prompted Bonds’ attorneys to argue that player testimonies should not be admitted into evidence because Anderson would not be able to substantiate their versions of meetings and conversations.

Instead, Illston ruled prosecutors could use player testimony to bolster their contention that Anderson supplied Bonds with the same steroids and other performance-enhancing drugs as well as instructions on how to utilize them.

Illston has thrown out prosecution evidence that reportedly links Bonds to doping tests in a Major League Baseball trial program that was to have kept results private, one that led to the league’s current steroid test program.

But Illston will allow into evidence a conversation between Anderson, Bonds and former business partner Steve Hoskins, which Hoskins secretly taped.

Prosecutors will also allow testimony regarding the possible side effects Bonds might have incurred from taking steroids.

The trial is expected to last at least two weeks, meaning it would be ongoing when the 2011 Major League Baseball season starts on March 31.

Bonds set the all-time MLB home run record in 2007, when he blasted his 762nd career homer, breaking Hank Aaron’s prior mark of 755. But he was booed by fans outside San Francisco who considered him a cheat after reports of his BALCO links.

Bonds also has the single-season home run record of 73, which he set in 2001.