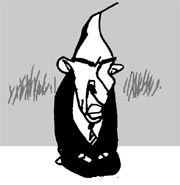 They say that bad luck comes in threes. There are no adages about happiness coming in groups because, with happiness, it’s the more the merrier.

Psychologists say bad memories tend to stay longer in the brain. So even if we experience three good events and three bad ones, our memory works to augment the bad memories while erasing the good ones.

The mischievous work of fate is epitomized in the tragic last scene of Shakespeare’s “Romeo and Juliet,” in which Romeo drinks a vial of poison believing that his beloved Juliet, who is in a very deep sleep, is dead. When she awakes to find Romeo dead beside her, Juliet kills herself with a dagger.

The late President Kim Dae-jung wrote in his autobiography about the series of unlucky events he experienced during his early political life. He ran in the general elections in 1958, but his application for candidacy was canceled because of pressure from the ruling party. Later, he ran in the by-election for the same constituency after the court nullified election results that had put his rival in office - only to lose. Soon thereafter, his first wife died.

In a television debate during the clamorous summer of 2008, the Grand National Party’s chairman, Park Hee-tae, sighed at the cascade of misfortunes choking the new government. After a honeymoon period lasting only a few months, the Lee Myung-bak administration faced nationwide demonstrations over imported American beef based on the mad cow scare. The government also had to deal with security tensions following North Korea’s killing of a South Korean tourist in Mount Kumgang as well as a heated territorial dispute with Japan over Dokdo.

Another bout of misfortune has hit the administration - this time it’s about religion. President Lee Myung-bak, a devout Christian, has irked the Buddhist community during his last three years in office. And recently, he angered Protestants, his largest base of support. Christian leaders threatened an antigovernment campaign and a boycott of lawmakers if the government’s proposed bill to introduce Islamic sukuk bonds passed the National Assembly. A couple of days later, the president and the first lady were seen deep in prayer on their knees at the suggestion of their pastor.

Our Christian president should remember that it is hard to predict the treacherous work of fate.