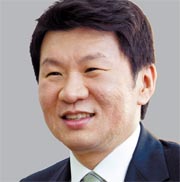 Just as the Super Bowl in the United States has the ability to entrance an entire nation each February, so too does the World Cup on Koreans.

Whether at 8 p.m. or 3 a.m., Koreans across the country burn the midnight oil for the quadrennial games, the sounds of cheers and jeers reverberating out of concrete apartments.

But despite the large fan base, it’s hard to find passion at K-League matches, which are often fought out in front of empty stands. It’s even hard to catch a K-League game on television.

Football fans have long complained that K-League matches tend to be boring. And as a result, the nation’s professional football league has found itself under the shadow of the much more popular KBO Korean Professional Baseball League.

With growing alarm that the K-League’s very existence was in jeopardy, former president Kwak Jung-hwan stepped down and was succeeded by Chung Mong-gyu, chairman of Hyundai Development and owner of Busan I’Park FC.

Chung has taken on his new role with vigor, coming into the office three to four days a week. He has been especially busy since the start of the K-League last Saturday.

“The K-League is similar to stocks that are underappreciated but have potential to grow,” said Chung when the JoongAng Sunday sat down with him on Feb. 25 in Jongno District, central Seoul. “It’s like a building that needs to be remodeled to have its value acknowledged. There’s no need to demolish the entire structure and start over. I’m definitely determined to revive the K-League.”


Q. You were asked to be president a couple times before, but you turned down the offers. What held you back from accepting the job?

A. I wasn’t sure if I could do the job right. I thought that I wouldn’t be capable of taking responsibility of something this big. And personally, I don’t like the spotlight and getting recognized. But so many people came to persuade me, and I finally made up my mind to give it a try.

I think it’s the quality of the matches and the fan service from the clubs. Clubs that are projected to have a bad season often give up and pay more attention to friendly games.

Football fans do not want to see a game with no passion. Regardless of the team, fans cheer because they all want the same thing: to have their team to win.

Otherwise, fans at least want to see their players go down fighting, losing by a small margin after fighting to catch up.

I also want players not to be too sensitive about the results of every match.

I think establishing long-term goals for each club and securing a strong fan base are far more important than getting good scores during the season.

Korean fans are often fanatical about official matches between national teams and foreign football clubs, such as Manchester United. What’s the reason Korean fans look away from the K-League?

I think the speed of a K-League match and its flow are much better than any international matches. An individual player’s ability to lead a match might fall behind those in the Premier League, but I think Korean players are now very close to catching up to European players.

The reason is how the matches are broadcasted. The K-League, which has between six and eight cameras following the match, is like a black-and-white movie compared to the Premier League, which usually has about 25 or 26 cameras capturing every moment of a match. It’s like a 3-D movie in comparison. If Manchester United matches were broadcast with only a couple cameras on the field, fans would of course say that they are boring.

Do people go to stadiums because the matches are exciting, or do matches get exciting as more people come out to the stadiums?

With Korea’s baseball league, people who go out to see a game for the first time usually do not know the rules perfectly. And for the first-timers, they are not going to the stadium because they think baseball is fun. Of course, they will be watching the games, but what excites them is watching the dancing cheerleaders in short shorts and jeering the other team.

It’s more like falling in love with baseball accidentally because people are there to see other people having fun. The K-League will be changed drastically as well, once people spread the word that, “Oh, it’s fun to go watch football games in a stadium.”

Would it be good to have another Seoul-based football club?

Actually, Busan I’Park had thought about moving its base to Seoul. Olympic Stadium in Seoul has a couple of drawbacks in being used as a football field, but it’s not a big problem to deal with. Also, FC Seoul said that it isn’t opposed to the idea of having another Seoul-based team.

What are some things the K-League needs to learn from other Korean sports leagues, such as baseball, basketball or volleyball?

I think the K-League needs to learn how to take advantage of media outlets. Compared to any other sport, there are many good-looking, manly and talented players. And I think I need to encourage as many players as possible to be out there in public, especially on entertainment programs on television. People need to learn the charm of these players to become their fans.

I’m going to persuade the coaches of the clubs who tell their players not to do interviews with the media to do otherwise.